Think about Cambodia, and what jumps to mind first is Angkor Wat – as the world’s largest religious monument and a frontrunner for eighth wonder of the world, it’s unsurprisingly Cambodia’s pride and joy and a tangible symbol for the country itself.

Siem Reap, a small city in northwest Cambodia, is the closest point of entry, and the entire worship grounds as well as other nearby ruins are conveniently known together as Angkor Archaeological Park. There is much spotlight on this site for its mysticism, Buddhist architecture and pop culture cred (Tomb Raider and Indiana Jones’ Temple of Doom were both filmed here), but the secret is out: there’s more to visiting Siem Reap than just relic-hopping. 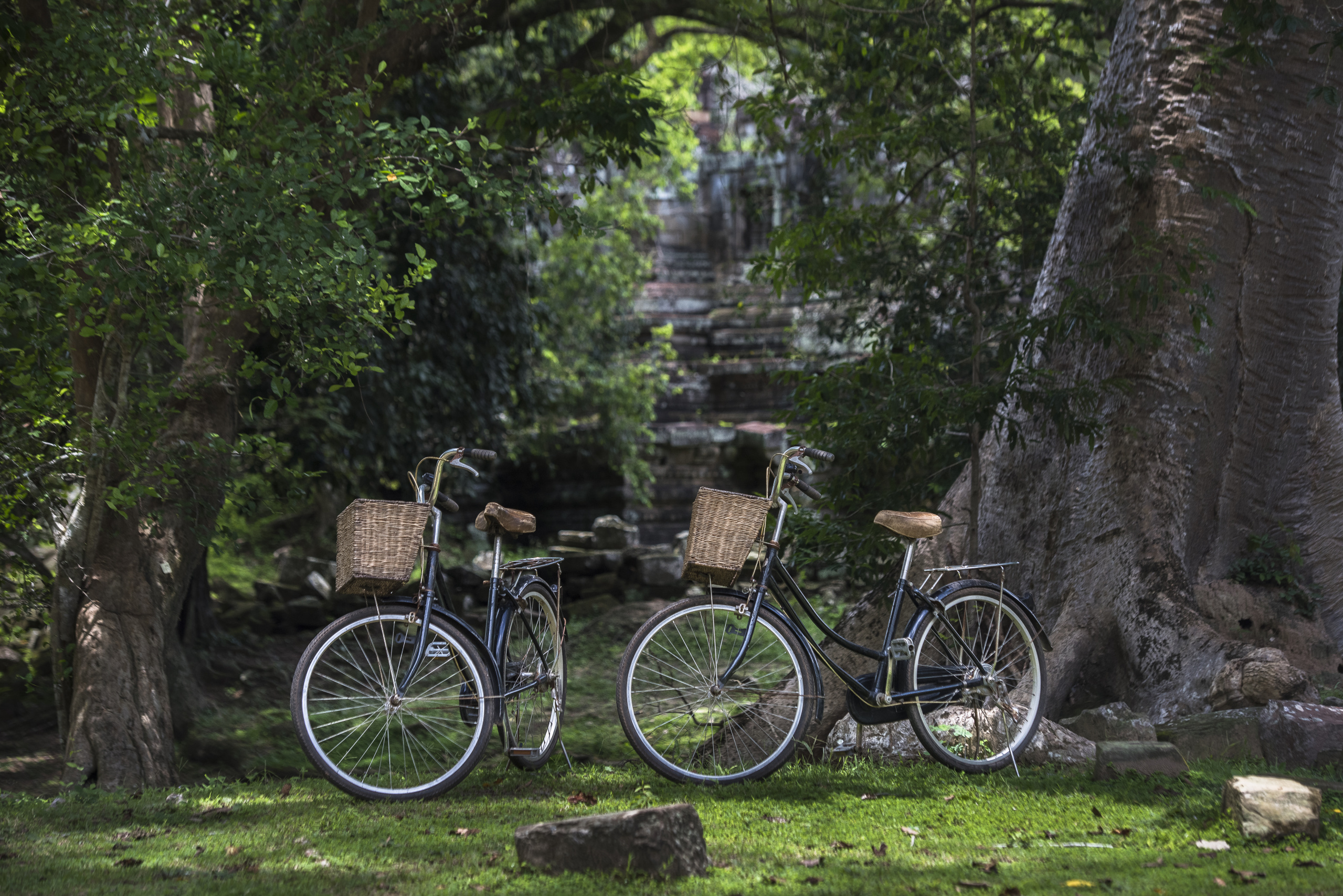 Siem Reap is a city that is highly nuanced, charmingly historic while with a strong sense of modernity and laidback while still kicking up an energetic buzz. There is much here to sweep you off your feet, whether it’s traditionnal Khmer dining in bucolic colonial buildings, market shopping sprees or a refreshing creative scene that spans performance to handicraft. Here is a guide to the best overall experience:

Feeling small next to colossal monuments, marvelling at rich Hindu and Buddhist etchings and escaping the powerful Cambodian sun beneath cool sandstone – no visit to Siem Reap can be complete without experiencing Angkor Wat in all its intensity. Cambodia’s national treasure offers a wealth of hidden corners and wide-open stretches worth exploring. Make sure to take a full day or two to soak it all in. 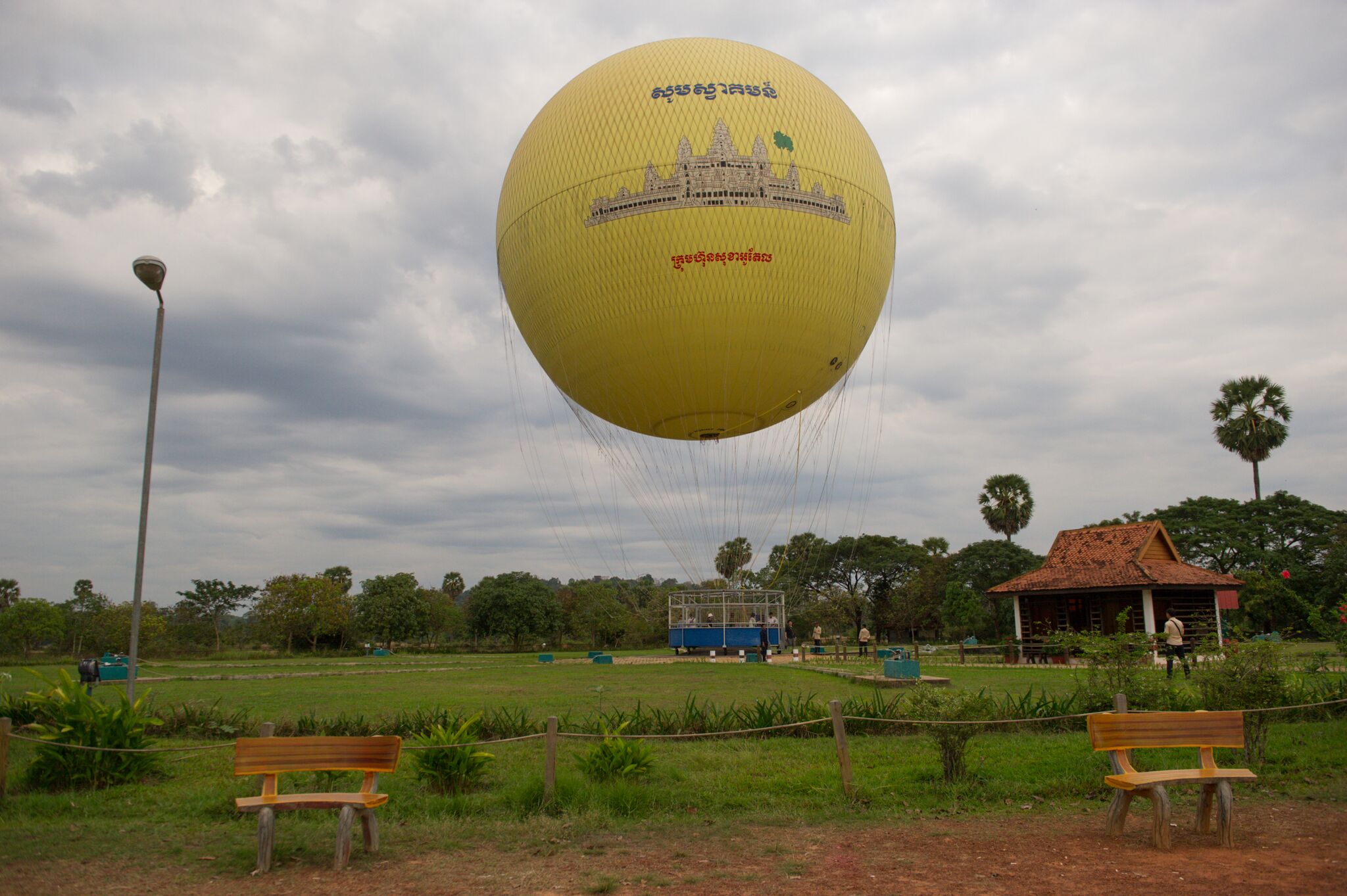 Angkor Wat and the plentiful other Khmer ruins of Angkor Archaeological Park can also be seen from a distance in a thrilling bird’s-eye view. Hot air balloons are not allowed to fly directly overhead for safety reasons, but there’s still plenty of amazing scenery in Siem Reap’s surrounding countryside to take in, from lush greenery to roaming wildlife. Treat yourself to a fresh perspective on local life, gliding overtop of farms and children riding their bicycles along dirt roads.

If you’re still set on sweeping views of Angkor Archaeological Park from up above, there’s always helicopters, which are allowed to fly closer to ruins than hot air balloons. Scenic flights range from just eight to 30 minutes or longer, with packages including vistas of Angkor Wat, Ta Keo mountain, floating villages and more. 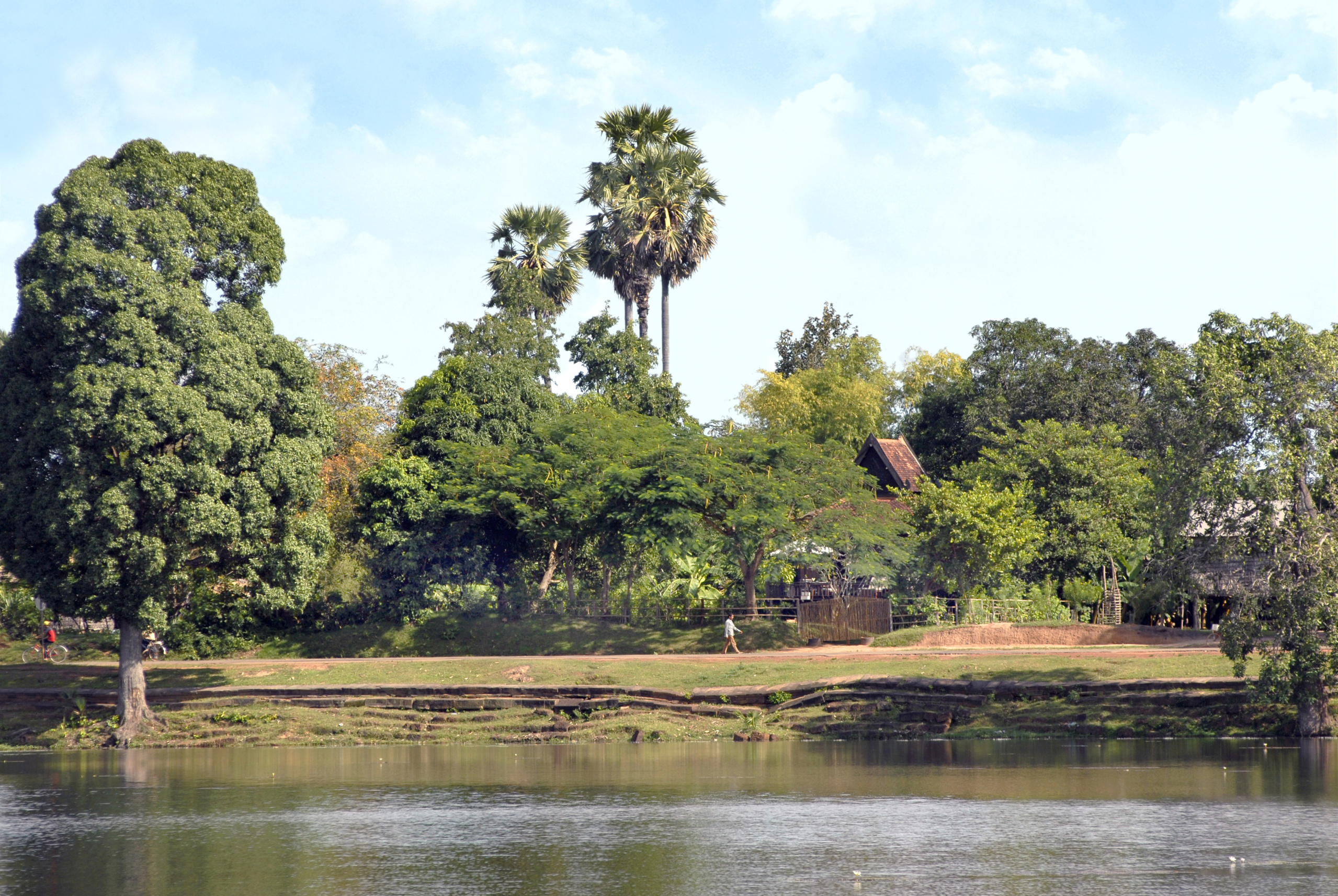 Siem Reap is full of treasures beyond those best-known gems of Angkor Archaeological Park. Get up early and watch the sunrise from Phnom Bok temple, situated atop 600-some steps with sweeping views of Tonle Sap Lake and endless rice fields. In the evening, don’t miss live entertainment at the Cambodian Circus. You thankfully won’t find dancing animals here, but a sophisticated show put on by graduates of a local school, which educates impoverished youth in performance arts for free.

Step into a temple and take part in an ancient Buddhist tradition – making merit, or the act of doing good deeds. You can make merit simply by purchasing some flowers and incense inside the temple, with fund going towards the grounds’ upkeep. You can also provide monks with alms, or food offerings, which they seek on streets in the mornings. Simple bites, such as rice or fruit, are welcomely placed inside of their bowls. 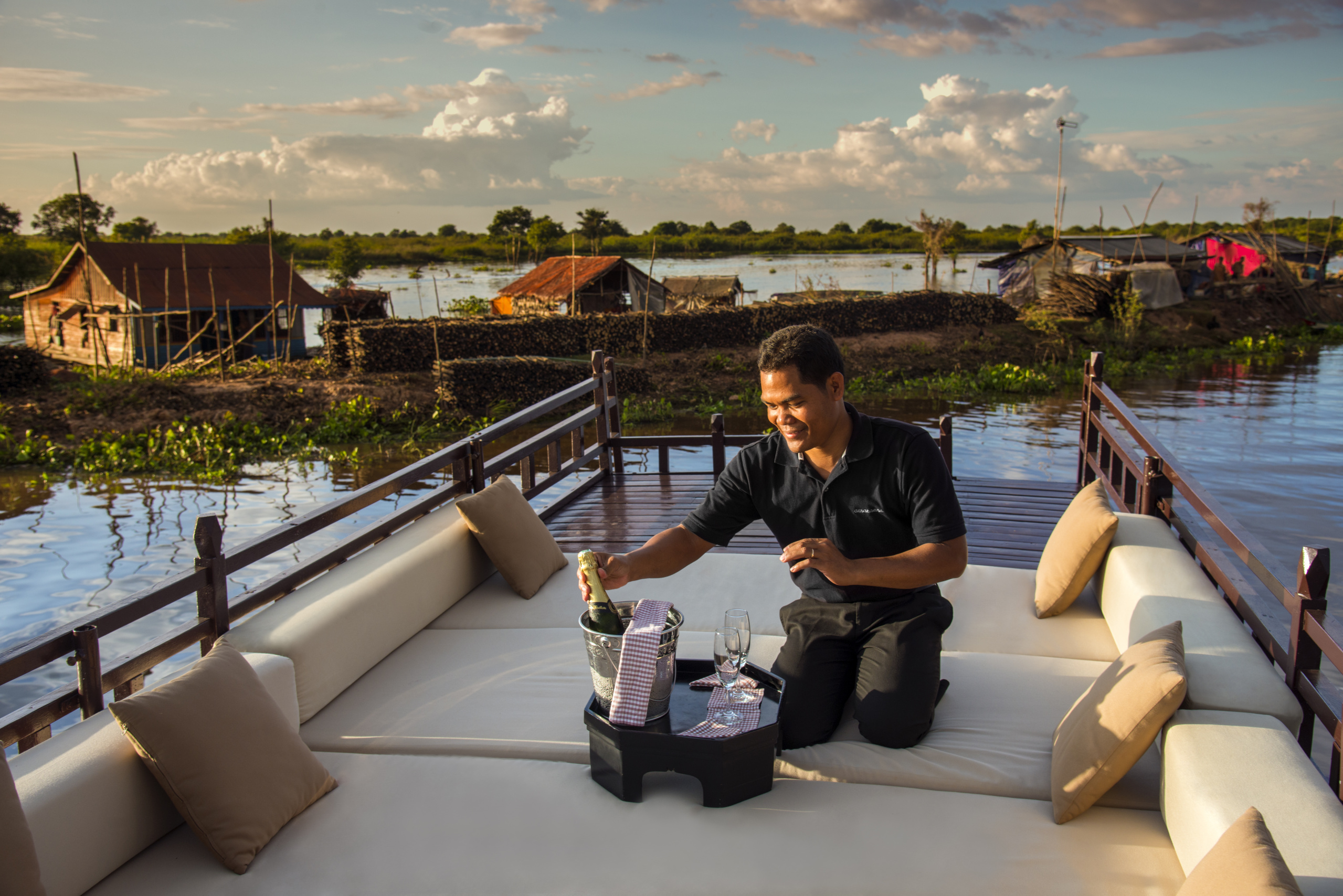 Go for a serene day trip to Tonle Sap Lake, where moments are paced delightfully slow. You can visit floating villages via boats, offering a peek into everyday lives of locals living in over-water homes. These clusters of wooden structures, erected with stilts, are fascinating to explore, especially with a good guide. Pick a reputable tour group for a pleasant experience, and also to ensure that money spent in floating villages contributes to the local community.

Spoil yourself with an afternoon of spa pampering, indulging in traditional Cambodian wellness techniques and local regional products. Amansara Hotel is known for its lush treatment packages, ranging from massages to steam baths, showers and scrubs. Become entranced with a full programme, including traditional Khmer clay masks and rice compresses, Reiki and nourishing facials to top off extravagance. You can also book in with blind massage therapists. In Cambodia, they are known as masters of the craft for their enhanced sense of touch.

Siem Reap is a buyer’s paradise, with outdoor venues such as the Old Market and Angkor Night Market made for endless exploring. Don’t miss also checking out the Well Made in Cambodia Market, a showcase for local design and unique craftsmanship such as silk scarves, sustainable wallets, gorgeous vegetal lacquerware and more. Noon Night Market also offers a range of fair-trade decorations and handicrafts, with 10 percent of proceedings going towards a local orphanage. 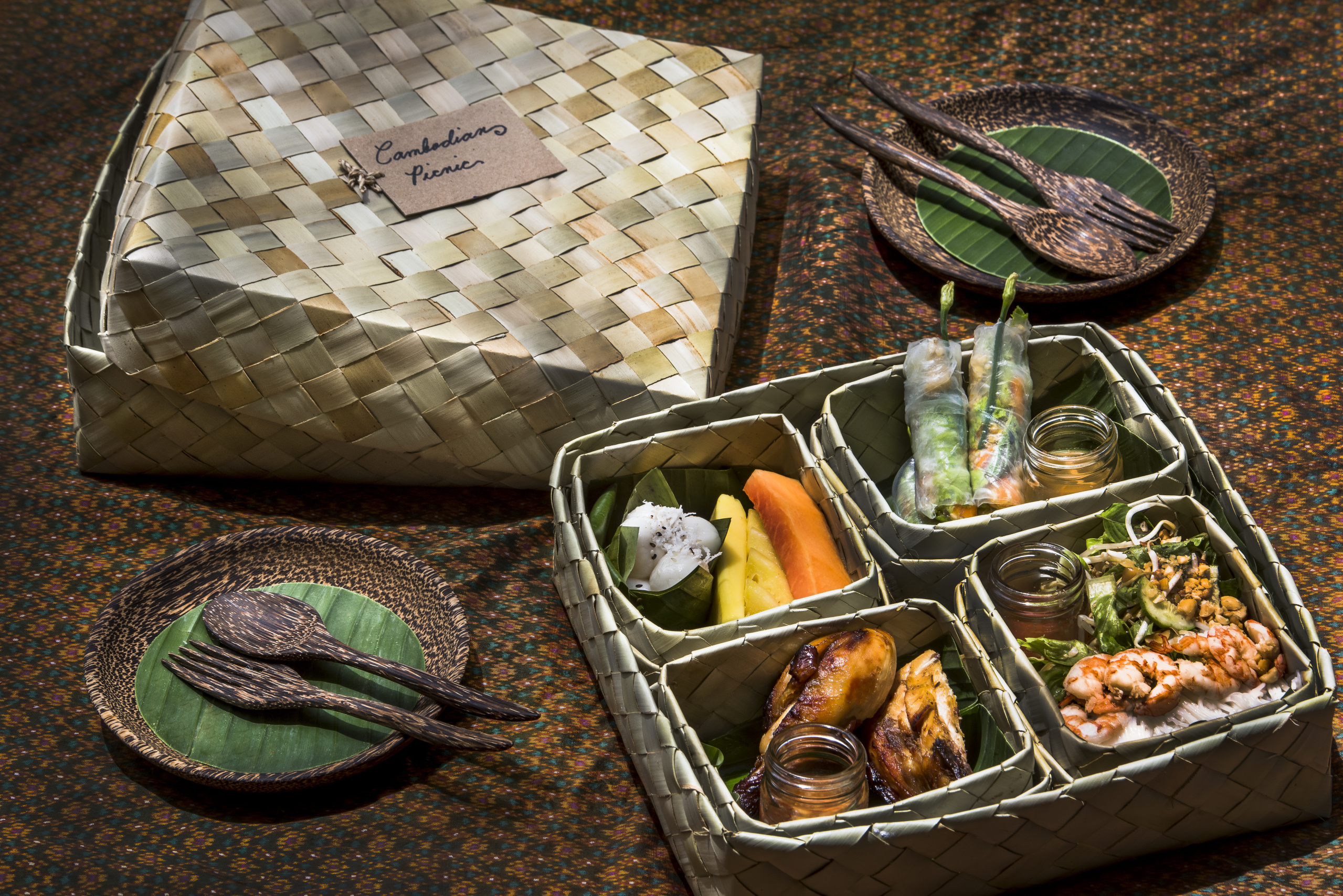 Khmer cuisine is famous for its bold and divergent flavours, fusing together by traditional additions such as palm sugar, garlic, chilli, lemongrass and kaffir lime. Learn about the delicate fusion of these components in the River Garden Hotel’s cooking class, which starts with a temple blessing and market shopping before slicing and dicing. River Garden also offers a street food tour for a more encompassing taste of authentic dishes and food stalls.

There’s no better definition of luxury in Siem Reap than a modern feast in this charming historic hotel. The Grand Hotel D’Angkor’s signature fine dining venue, Restaurant Le Grand, serves timeless Khmer cuisine with thoughtful contemporary twists. Fresh fish and shellfish from the Mekong and Tonlé Sap rivers are served with freshly plucked fragrant herbs and spices. There are also comforting Western favourites such as grilled lobster and roast loin of lamb too. Savour complex flavours with a bottle of the restaurant’s best – the wine menu has selection from around Europe, South America and Australia, from well-known vineyards to rare and vintage finds. 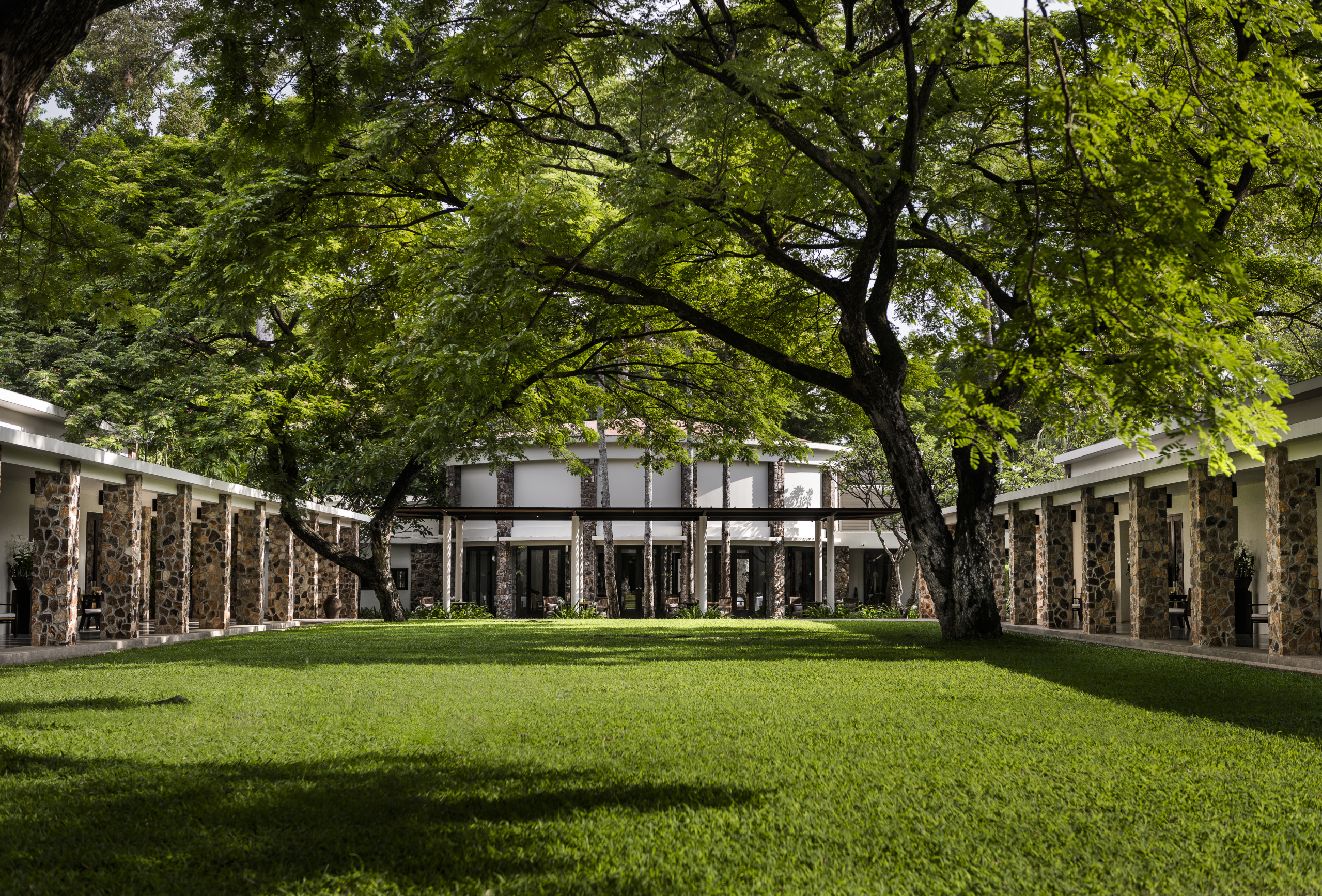 Where to stay  – Amansara, Cambodia

Situated in Siem Reap, the cultural capital of Cambodia, Amansara lies just 10 minutes from the entrance to Angkor Wat. Once the guest villa of King Norodom Sihanouk, today this walled garden estate serves as a tranquil 24-suite retreat with the ambience of a gracious home. Just a 15-minute drive from Siem Reap airport, Amansara provides an ideal base for exploring the UNESCO-protected temples of Angkor and Khmer culture. Amansara combines the Sanskrit-derived word for ‘peace’ with apsara, the ‘heavenly nymphs’ of ancient Hindu texts. Once known as Villa Apsara, this former royal retreat was built in 1962 by French architect Laurent Mondet. Quintessentially ’60s in character, it featured 12 low-slung chalets spaced around a curved swimming pool and a shady lawn. Today Amansara presents 24 suites, all with private courtyards and 12 with private swimming pools.   www.aman.com/resorts/amansara