ALL ABOARD – Luxury boat cruises and trains add to the magic of experiencing Thailand in style.

Thailand has a rich heritage of train travel, after all it was the railways that pioneered the tourist industry. The heritage is glamorous and today’s service depends on a spider web of 4,043 kms of one-metre gauge track reaching the Kingdom’s borders with Laos, Cambodia and Malaysia with a through service to Butterworth for the island of Penang and onward services to Kuala Lumpur and Singapore.

The country’s several rivers and canals also open the heart of the Kingdom to the traveller. The historic means of travel in Bangkok (and Thailand) was by canal/river rather than by road. The city was nicknamed ‘The Venice of the East’ by Sir John Bowring, Queen Victoria’s Governor of Hong Kong. The options are several and below are the ones that must not be missed out on. 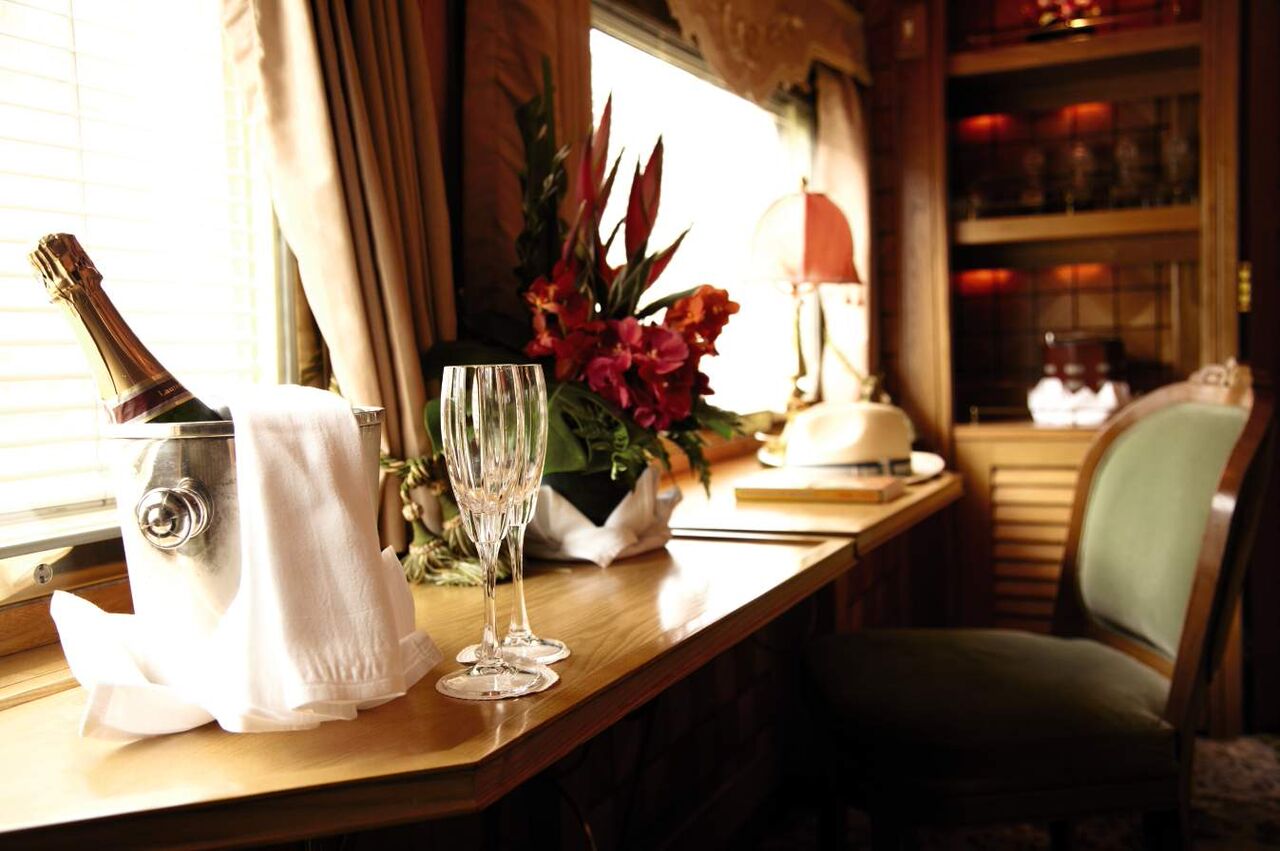 Air travel may be faster but the most elegant way to arrive in Bangkok from Singapore is aboard the Eastern & Oriental Express. Originally built in Japan in 1972, the 31 carriages started life as the Silver Star in New Zealand. Having being acquired by Orient Express, now Belmond, they were remodelled by Gerard Gallet who was responsible for both the British Pullman and the Venice Simplon Orient Express. 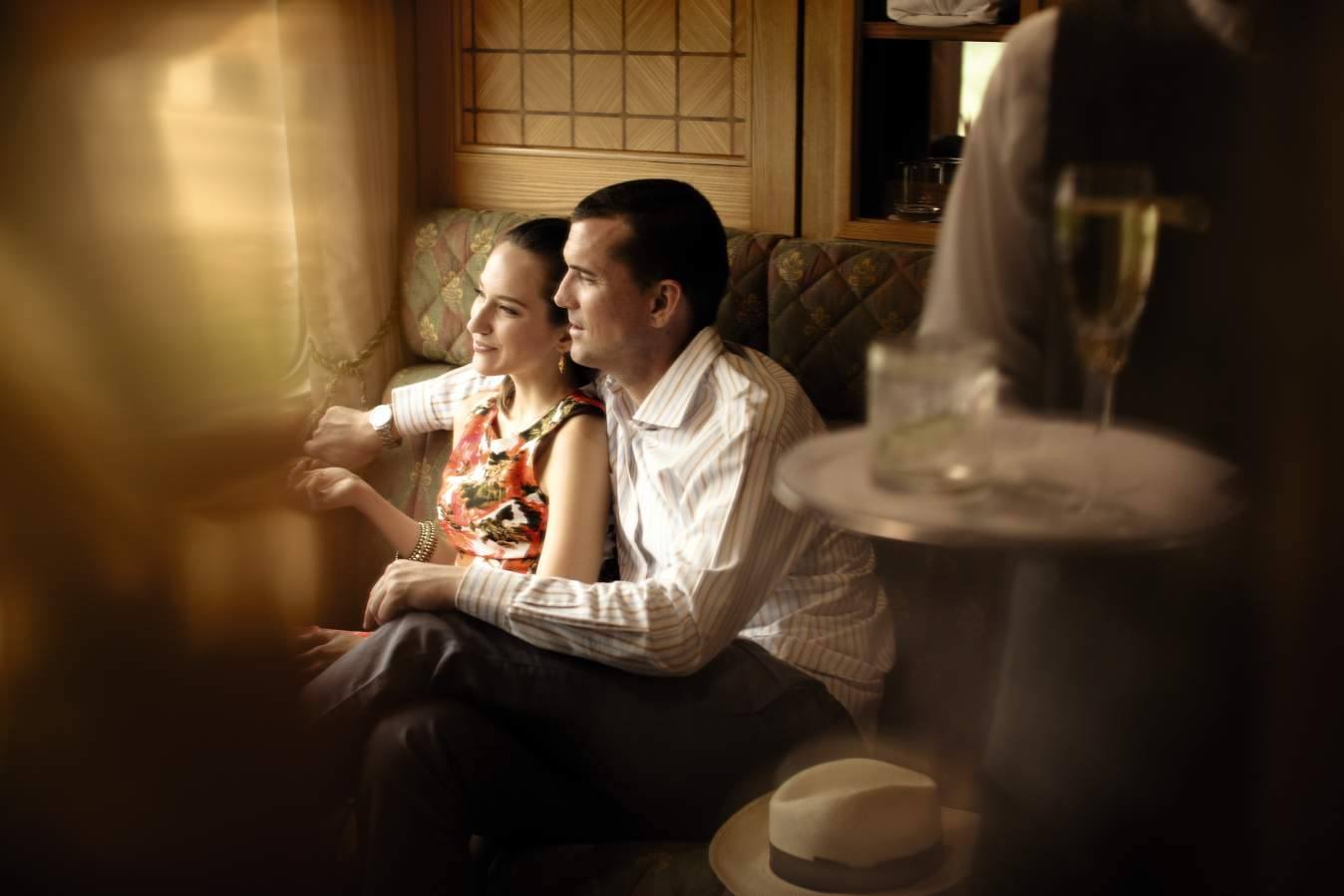 The interior panelling is decorated in elm, cherry, teak and rosewood, the diamond shaped marquetry is hand cut by local craftsmen. The compartments are panelled in cherry wood and elm and the Bar Car in pale ash wood. The Observation Car is floored in Burmese teak. The three restaurant cars Adisorn, Rosaline and Malaya have skilfully engraved marquetry, distinctive table lamps and exquisite table seating in a two or four configuration.

The Salon has a traditional Chinese feel, decorated in dark rosewood with richly coloured upholstery. The window pelmets are hand embroidered in Malaysia and the carpets are hand tufted in Thailand.

The two and a half day journey is a ritual of breakfast and afternoon tea served in the cabin with allocated sittings for lunch and dinner served in the dining room and daily stops for excursions. An indulgent life of eating and drinking and changing for the next meal.

A train journey can be a special part of any Thai holiday for the scenery, history and the unique peaks of the kingdom. There are many route options and they roll into most parts of the country.

Travelling by train in Thailand is also a great way to see the diverse countryside on your way to tourist areas. From Bangkok, you can ride for an hour or a little more to the ancient city of Ayutthaya, the seaside resort city of Hua Hin, to the “Death Railway” in Kanchanaburi, or visit Lop Buri and its unique history. Overnight trips from Bangkok to Chiang Mai in the North, Nong Khai or Ubon Ratchathani in the Northeast, or all the way south to Malaysia are memorable, too.

Trains have a long history in Thailand with the first entering service in 1893. It ran the 21 kilometres from Bangkok to Samut Prakan, south of the capital near the coast. By 1960, most routes had been paved over to make room for Rama IV Road, but by that time many other routes had been established and now the State Railway of Thailand (SRT) operates more than 4,500 kilometres of track going to all four corners of the kingdom.

Trains range from the luxurious Eastern and Oriental Express to the first-, second- and third-class trains. Third-class “hard seat” trains are actually a great way to travel in the daytime to watch the country roll past. The cars have open windows offering a breeze with a view and lets passengers hear the sounds of the countryside. Better still are the food hawkers who walk up and down the moving carriages selling local delicacies and cold drinks. It is a memorable way to experience Thailand.

Second class offers more comfortable seats in air-conditioned carriages and sleepers (also air-con) with upper and lower berths along each side for a comfortable sleep as the train gently rolls along. First class have private rooms with sleepers for couples or individuals. Passengers can control the air-con and the room includes a hand basin for washing.

If you are travelling to or from Malaysia or Lao PDR., you can leave or enter the country by train.

Some of Thailand’s rail highlights include:

The “Death Railway” is what remains of the engineering marvel of the Burma-Siam Railway the Japanese Imperial Army built during World War II using prisoner-of-war and Asian forced labour. Conde Nast Traveller recently listed it as one of the 10 Best Train Journeys in the World.

The 415-kilometre route claimed nearly 16,000 POW lives and perhaps as many as 100,000 Asian labourers from disease and overwork. Most of the old route is now closed, but the remaining two-and-a-half-hour trip from Kanchanaburi town to Namtok Sai Yok passes through beautiful tropical forests and along the wild Kwai Noi River. It is a serene and sometimes spectacular trip through a sombre past.

The route includes passing over the River Kwai made famous in the 1957 Oscar-winning movie The Bridge on the River Kwai. There are two trains a day from the Thon Buri Railway Station next to Bangkok and the trip can be a day outing, or you can spend the night in Kanchanaburi taking time to visit the War Museum and having dinner in a riverside restaurant. Accommodation ranges from floating guesthouses, to nice hotels to resorts.

This is best in a second- or first-class sleeper. It leaves Bangkok in the evening and is rolling into the mountains of Northern Thailand as the sun rises. It stops in several cities along the way, including Lampang early in the morning if you want to visit a less travelled ancient city. From there, it passes through Thailand’s longest tunnel then stops near the entrance to Doi Khun Tan National Park. From the station, you can hike under one kilometre to the Park, where bungalows and camping are available and continue to Chiang Mai a day or two later.

In addition to Chiang Mai, Thailand has three more overnight routes. If you are travelling to the Northeast or South, overnight trains are a great option. The trains to Nong Khai and Ubon Ratchathani arrive in their destinations in the morning. For a longer trip you can go south all the way to Malaysia.

For a unique day trip, the Thon Buri to Samut Songkhram “train to nowhere” is a great option. The nowhere is due to the route does not connect with the greater rail network in Thailand. Built as a private line near the coast to connect the fishing ports with Bangkok markets, the State Railway of Thailand now operates the 80-kilometre line that runs eight times a day. The route has two sections and a different train on each. From Wongwian Yai in Thon Buri, the first goes about halfway to Samut Sakhon, then after a ferry ride across the Tha Chin River, another train takes passengers to the Mae Klong Railway Market in Samut Songkhram next to the Mae Klong River. It is a good day trip, but can also be a nice overnight trip staying at Samut Songkhram.

No alcohol is allowed on Thai trains except the Eastern and Oriental Express, but the longer routes have restaurant cars. The third-class trains have food hawkers, and they make any trip more enjoyable.