When it comes to the great wines of Piedmont, Brachetto d’Acqui is one of the wines that stand out for its rulebook that restricts its area of production about 1,200 hectares.  Located in the hills of the Upper Monferrato area, distributed among 26 municipalities around Acqui Terme, of which 8 in the province of Alessandria (Acqui Terme, Terzo, Bistagno, Alice Bel Colle, Strevi, Ricaldone, Cassine and Visone) and the remaining 18 in the province of Asti (Vesime, Cessole, Loazzolo, Bubbio, Monastero Bormida, Rocchetta Palafea, Montabone, Fontanile, Mombaruzzo, Maranzana, Quaranti, Castelboglione, Castel Rocchero, Sessame, Castelletto Molina, Calamandrana, Cassinasco and Nizza Monferrato). 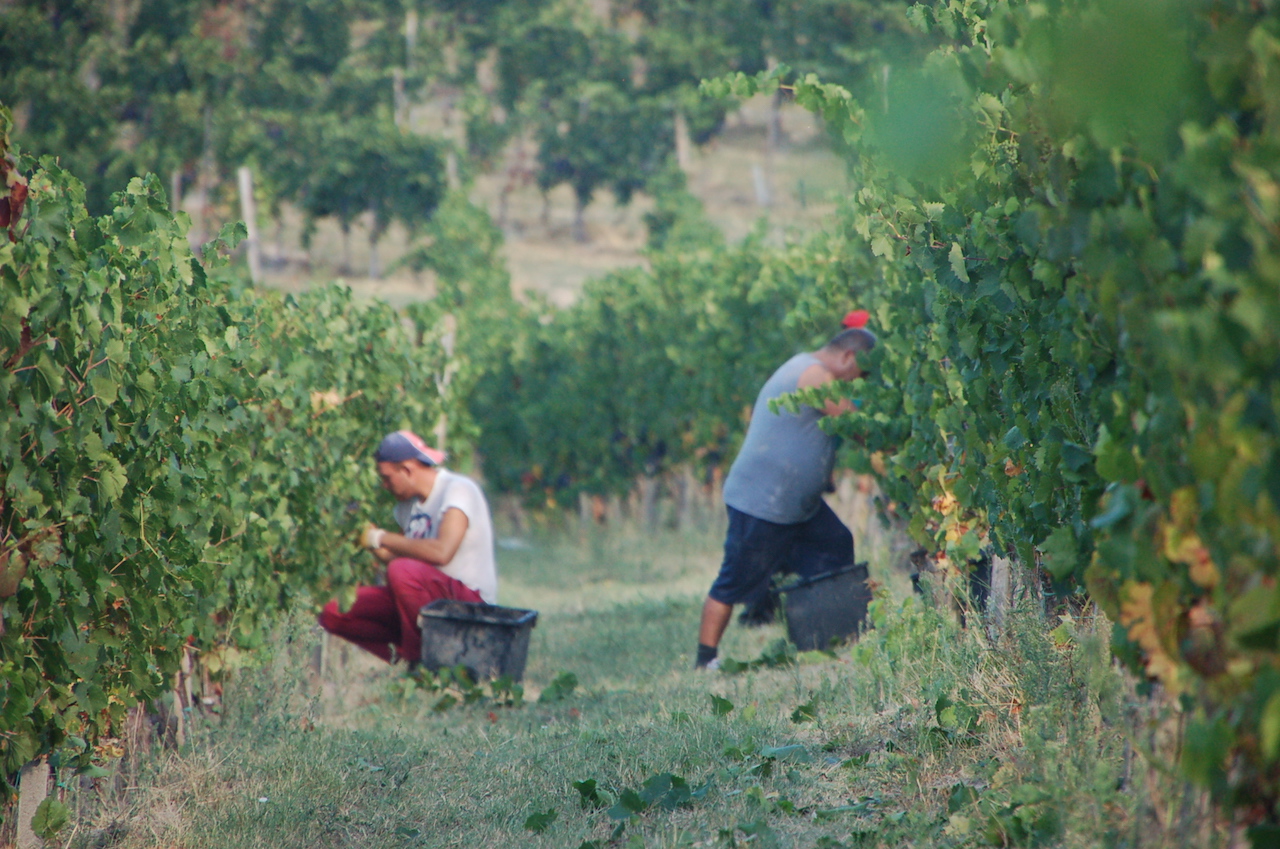 The Upper Monferrato is characterized by a very complex orography, resulting in highly differentiated microclimates. The characteristics of aromatic wines depend heavily on factors such as the altitude of the vineyards, their exposure, the degree of absorption of moisture and heat and their proximity to a river. The Brachetto d’Acqui vineyards are cultivated by more than 750 vine-growers, for an average of roughly 1.8 hectares each. With infinite variations of climate, typical of the foothills of the Alps, marked by fairly harsh winters, hot summers and usually mild springs and autumns, with a considerable difference in temperature between day and night ensuring that the grapes achieve the right sugar content and develop the aromatic compounds that give Brachetto its delicate and intense fragrance.

The nature of the soil is also fundamental, as it determines the contents of the individual grapes and their chemical composition. From the geological point of view, the area belongs to the Tertiary Age and is made up of marine sediments of various types and consistencies: white soils, rich in calcareous content and limestone, which yield very fine, elegant wines; red soils, which highlight the body, color and alcohol content; sandy soils, which produce lighter, more fragrant wines. The bunches of Brachetto grapes are full and dense, with firm-fleshed berries of a lovely purplish-blue, it is the high sugar content and powerful aroma provided by the terpenes. The aromas of the Brachetto are found in the grape skin, the main one is called “Geraniol” which gives the Brachetto the characteristic and unique scent of red rose. 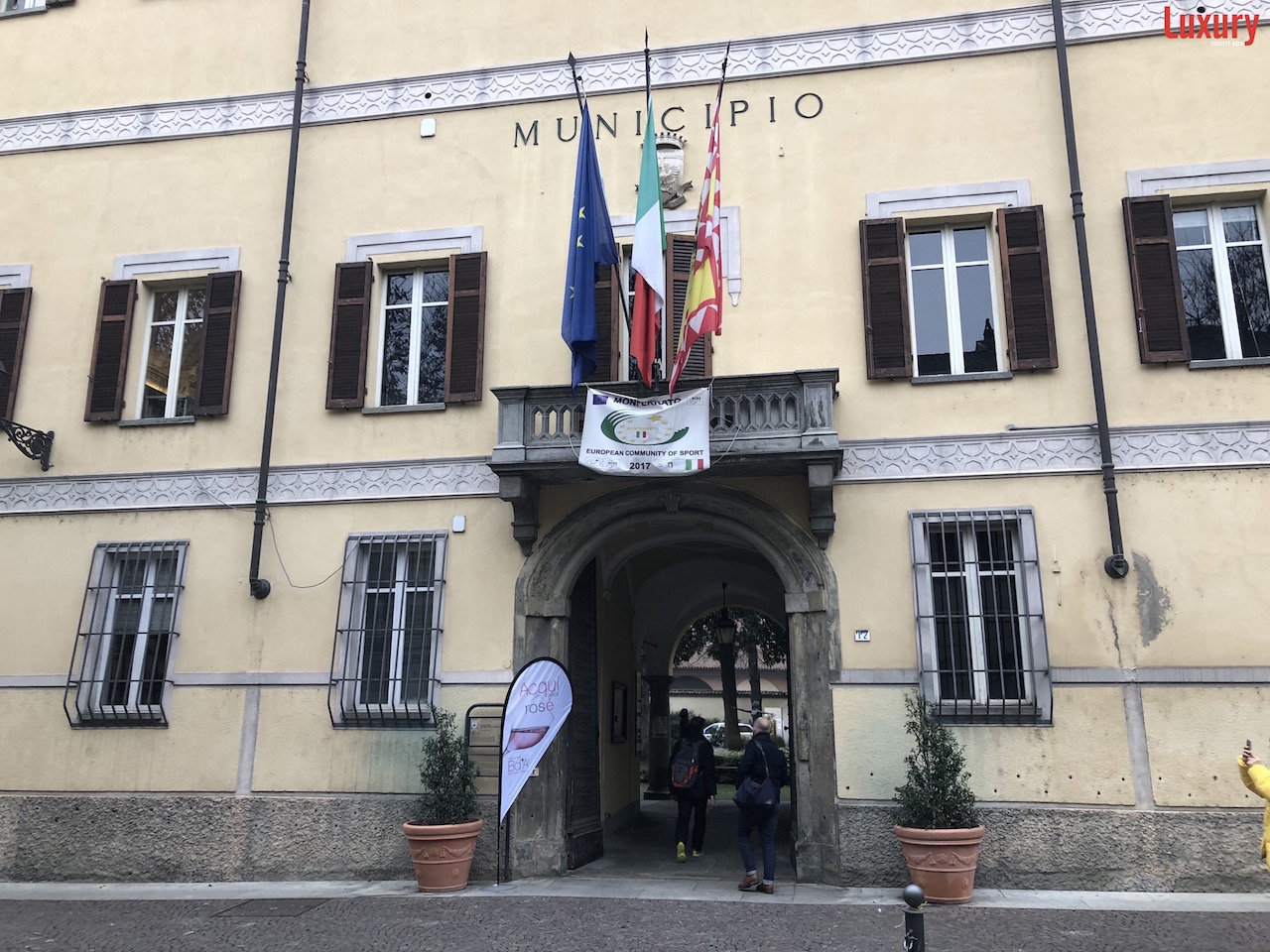 The first recorded reference to Brachetto dates to the Roman Empire, when some writers, in describing the habits of the sub-Alpine Gauls, mention a sweet, aromatic wine known as “Vinum Acquens,” much prized by the patricians of the time. This was almost certainly a wine made from raisins, to which remarkable aphrodisiacal qualities were attributed. In fact, both Julius Caesar and Mark Anthony gave a few wineskins of it to Cleopatra, who had her lovers imbibe it to rekindle their passion. After, in 1817 Gallesio, a naturalist, referred to Brachetto as a “celebrated wine”, suited for desserts, with a high alcohol content and little color, which when aged tastes similar to Port or Sherry wine. Gallesio also notes that Brachetto, sweet and sparkling, was very popular in South America; all this leads one to believe that in that period it was produced in relative abundance. 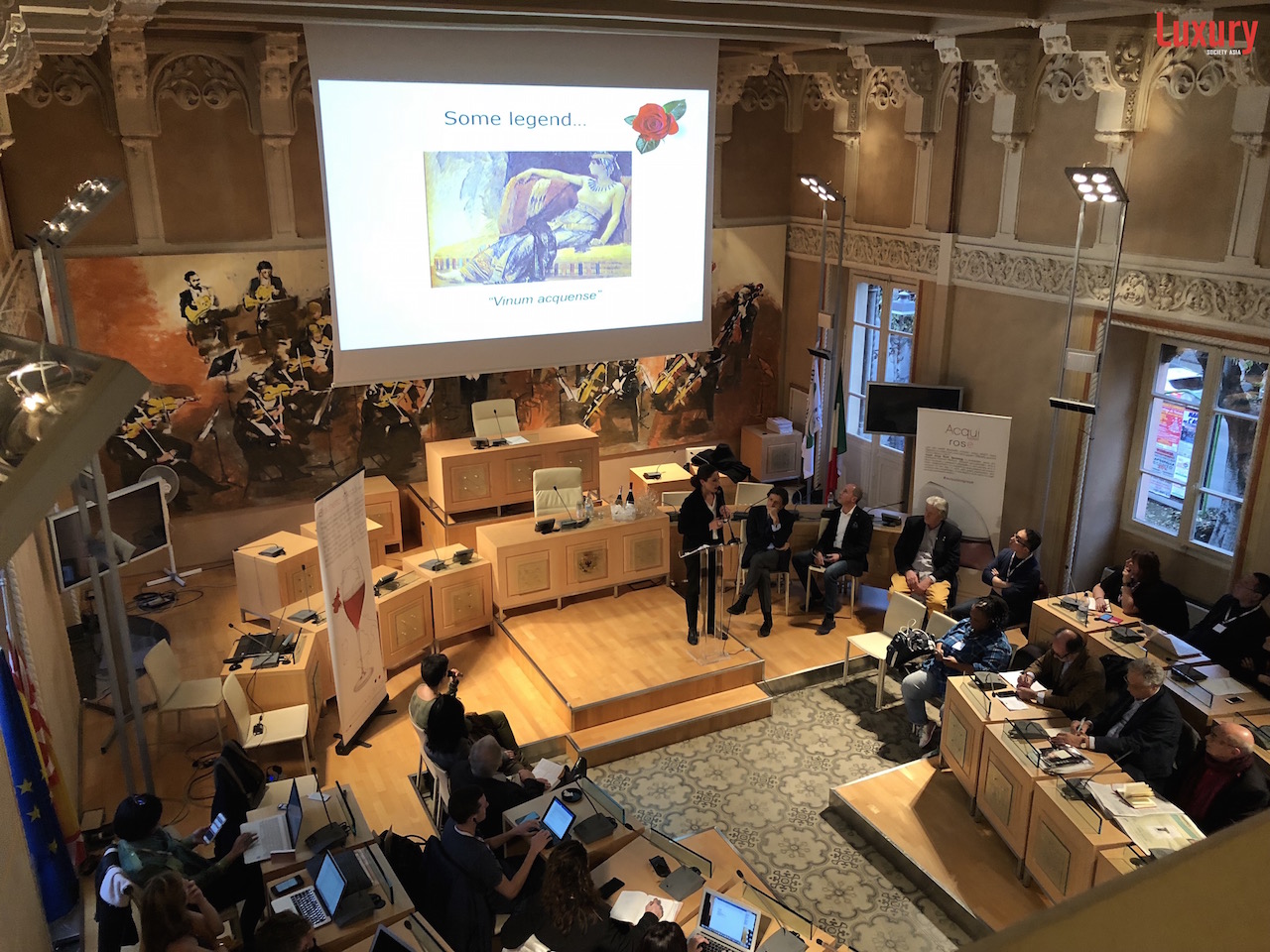 The first to provide an accurate and full description of Brachetto wine was Garino Canina, in 1922, who classified it scientifically: “…among fine wines, Brachetto is in the category of sweet, aromatic reds: indeed, the wine has a special fragrance, a moderate alcohol content and is sweet to the taste and not highly colored. For the most part it is consumed sparkling or bubbly…” 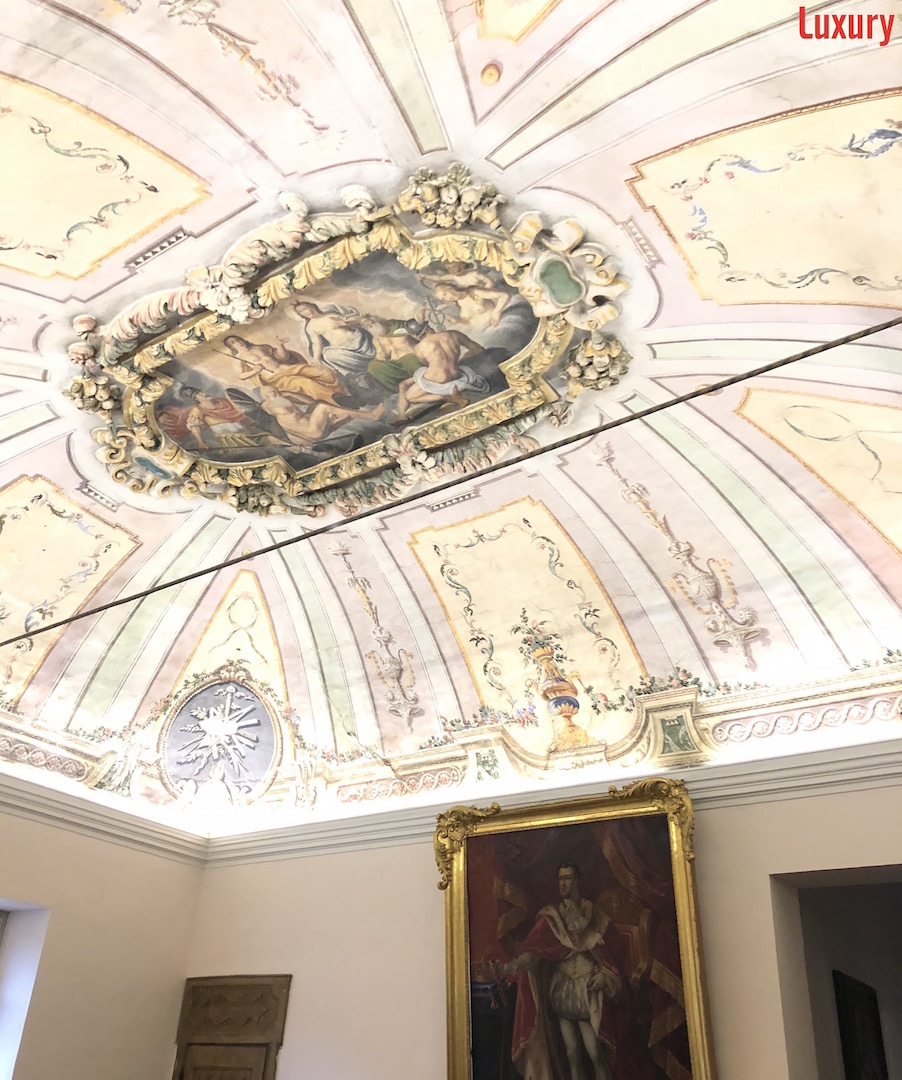 Among the information provided by Canina- very important from a historical standpoint- one of the most interesting facts is that Brachetto was particularly common in the area to surround Acqui and Nizza Monferrato, although the volumes marketed were low, only 500 hl. 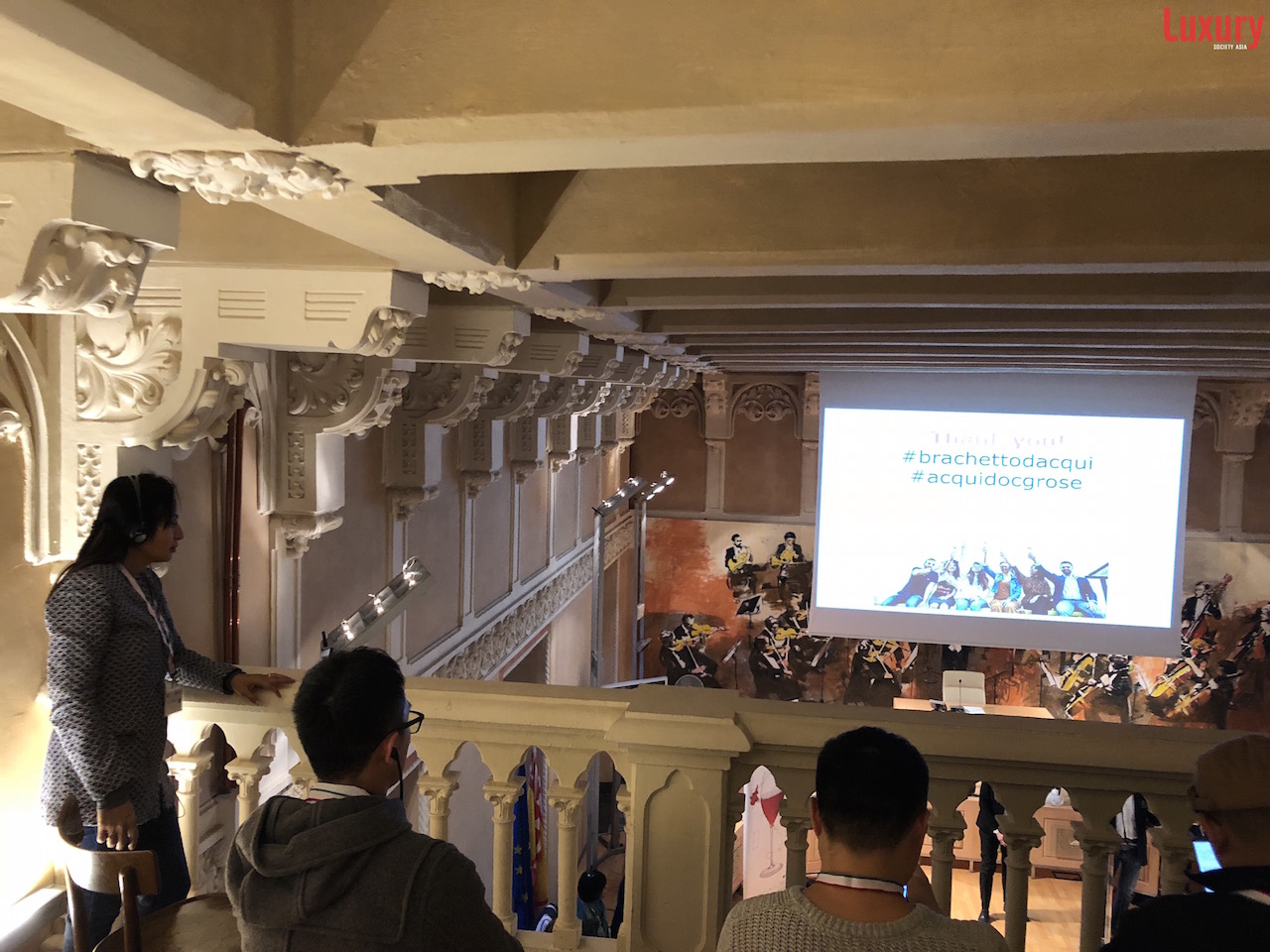 Why had a wine that only fifty years earlier had been exported in quantity almost disappeared? The infestation of phylloxera had devastated the vineyards after the world war 1°. When new vine were planted , growers chose varieties that best satisfied the market demands of the time, largely overlooking this variety, which required special care are nurturing. It thus went into a short oh hibernation.

The awakening is recent indeed: in the 1950s, in the hills of the southern Piedmont, where production had continued in small niche wineries run by aficionados, a winemaker who valued tradition but was also farsighted, Arturo Bersano, perfected a sparkling Brachetto vinified in pressure tanks using the Martinotti-Charmat Method. Since then, Brachetto has regained its rightful place among the great aromatic wines, standing out for its special qualities, and is highly appreciated by the most refined connoisseurs. 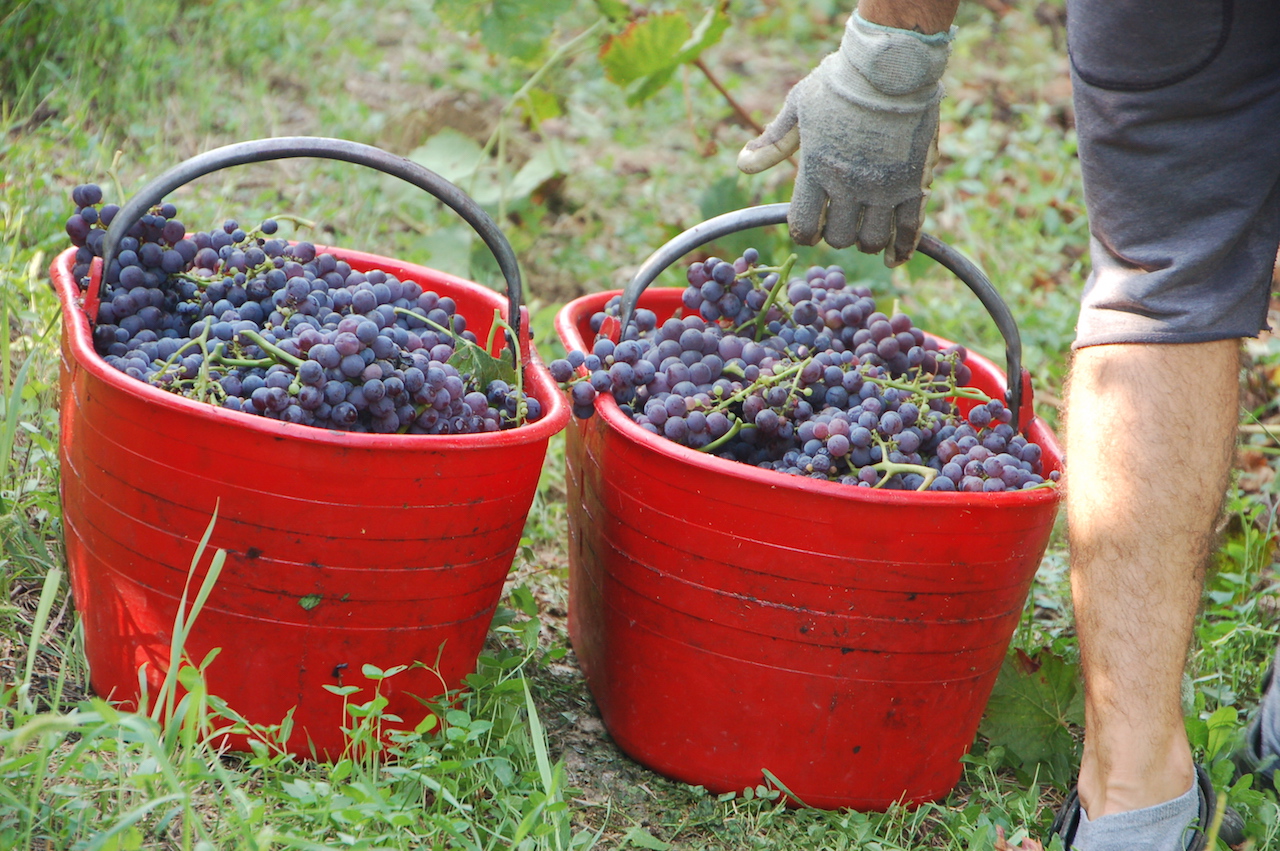 What makes Brachetto stand out?

The complex and delicate system that governs its cultivation, in which each component plays a significant influence on the final product: an intriguing wine with a wealth of subtle differences, small and large, that invite comparison, stimulating a search for the bottle that most fully satisfies one’s individual tastes.

Brachetto d’Acqui is the perfect example of how a limited area can provide an infinite array of different stimuli and variations. Here, nature and the hand of man combine to satisfy taste, passion and desire. 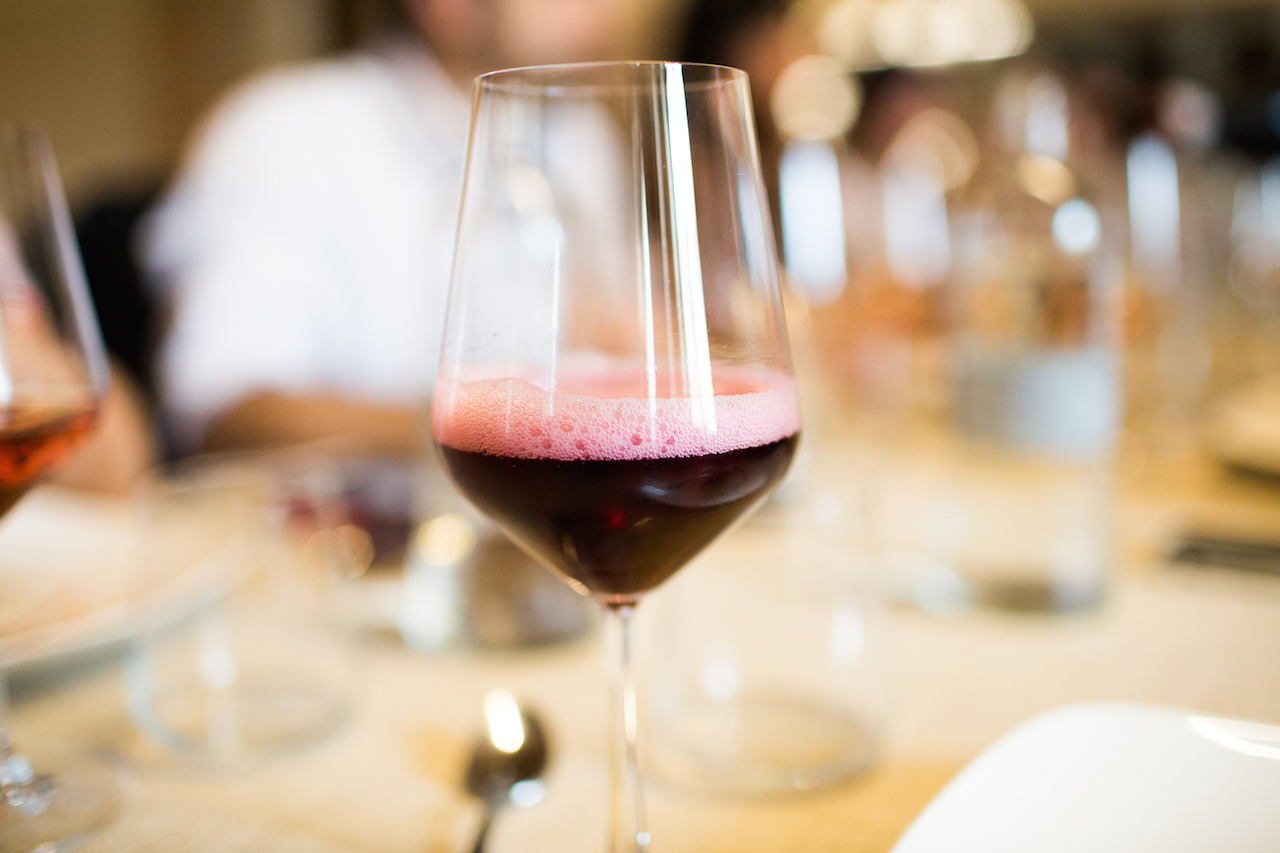 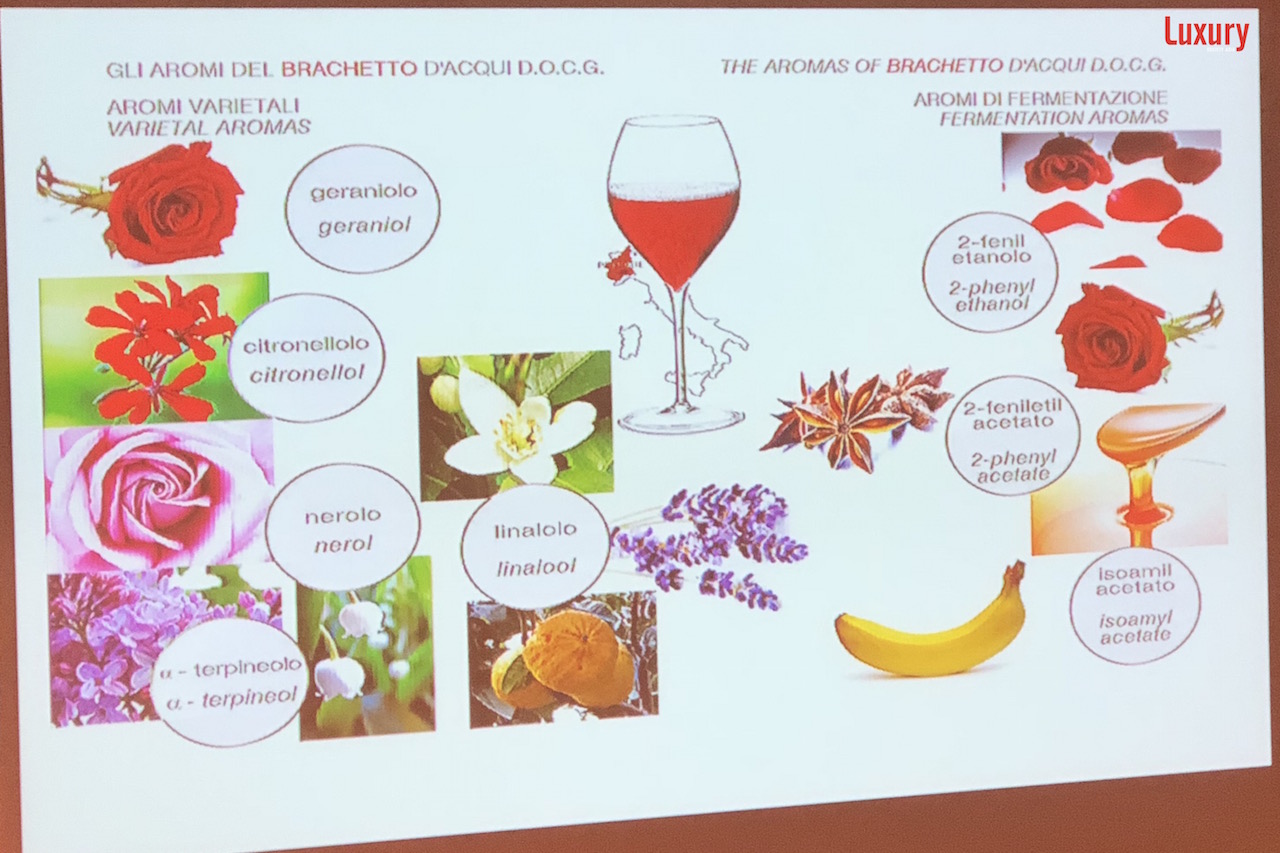 Brachetto d’Acqui can be enjoyed while young when it expresses all the fragrance of its grapes: this is the time when one can most clearly distinguish the fragrances of red roses and ripe fruit. The taste is fresh, lively and musky. Storage should be in a cool and dark place. Sparkling or Frizzante or Passito, it should ideally be served at a temperature of between 8° and 10°C and to be consumed within 2 years. 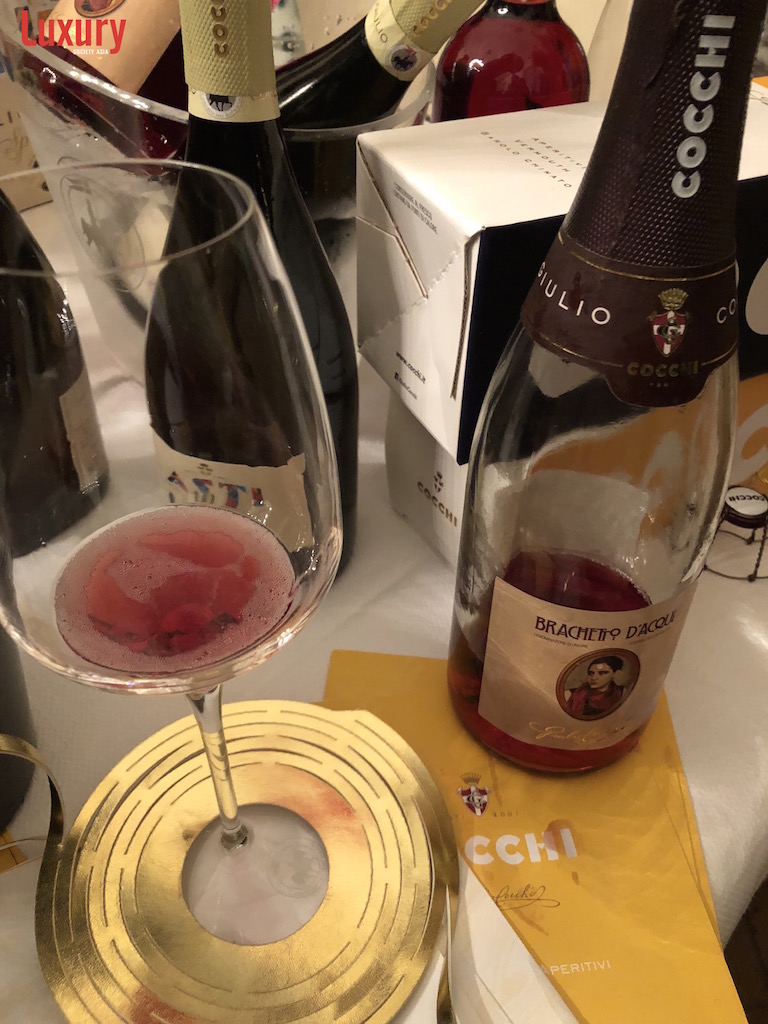 Personally, I think Brachetto d’Acqui is great to pair with dessert and chocolate. The fruit-laden silkiness of the wine bursts upon the palate in a cascade of intriguing and appealing sensations that heighten the aromas and flavors of the foods it accompanies. 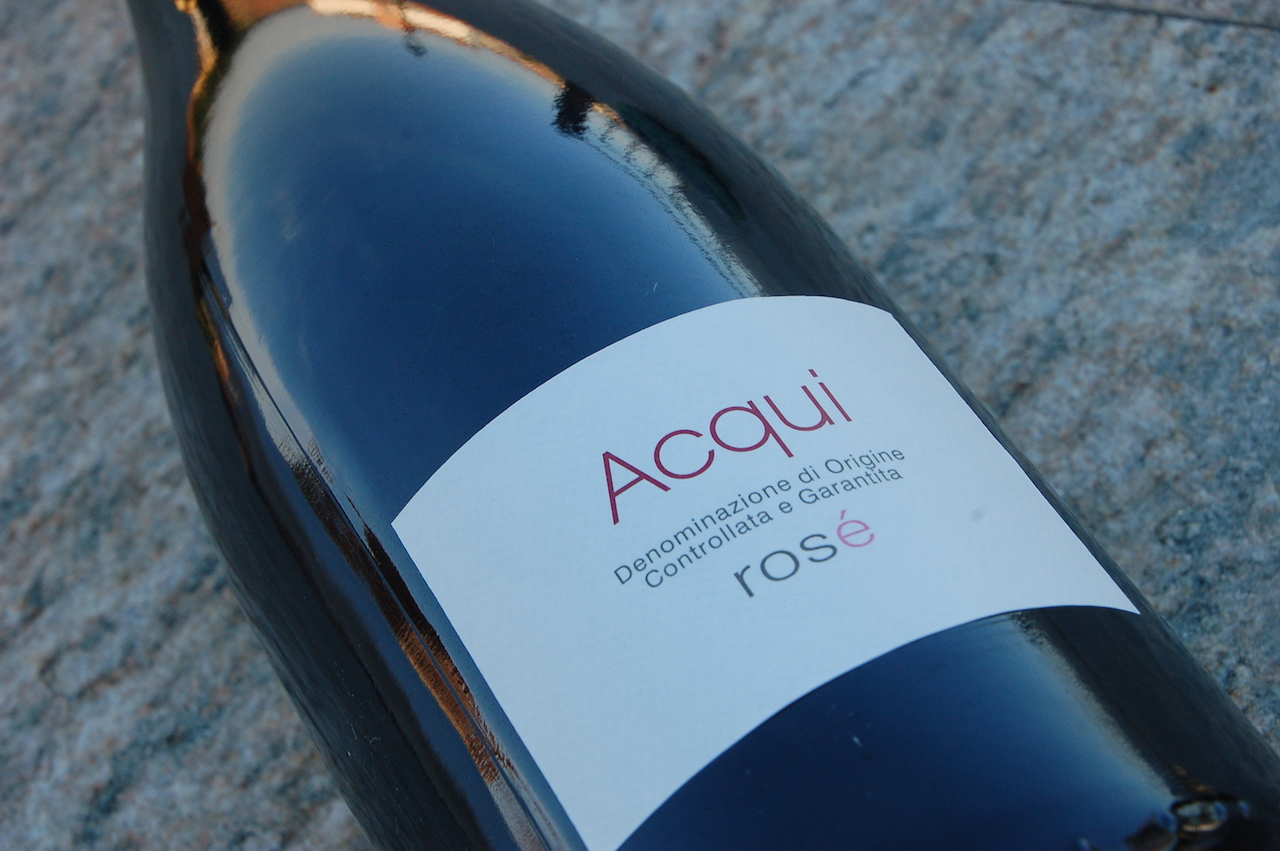 Acqui DOCG: Featured side by side with the traditional sweet “Brachetto d’Acqui”, Acqui docg Rosé “dry” is a new entry both as a sparkler and as a still wine with low sugar content. Both styles were rediscovered as part of a collaborative research project involving the member companies of the Consorzio di Tutela, initiated with the 2017 harvest season. As documented by historians and researchers, dry Brachetto was a well-known wine back in 1873, one which enjoyed popularity in the early 20th century as an aperitif or as a whole-meal drink. 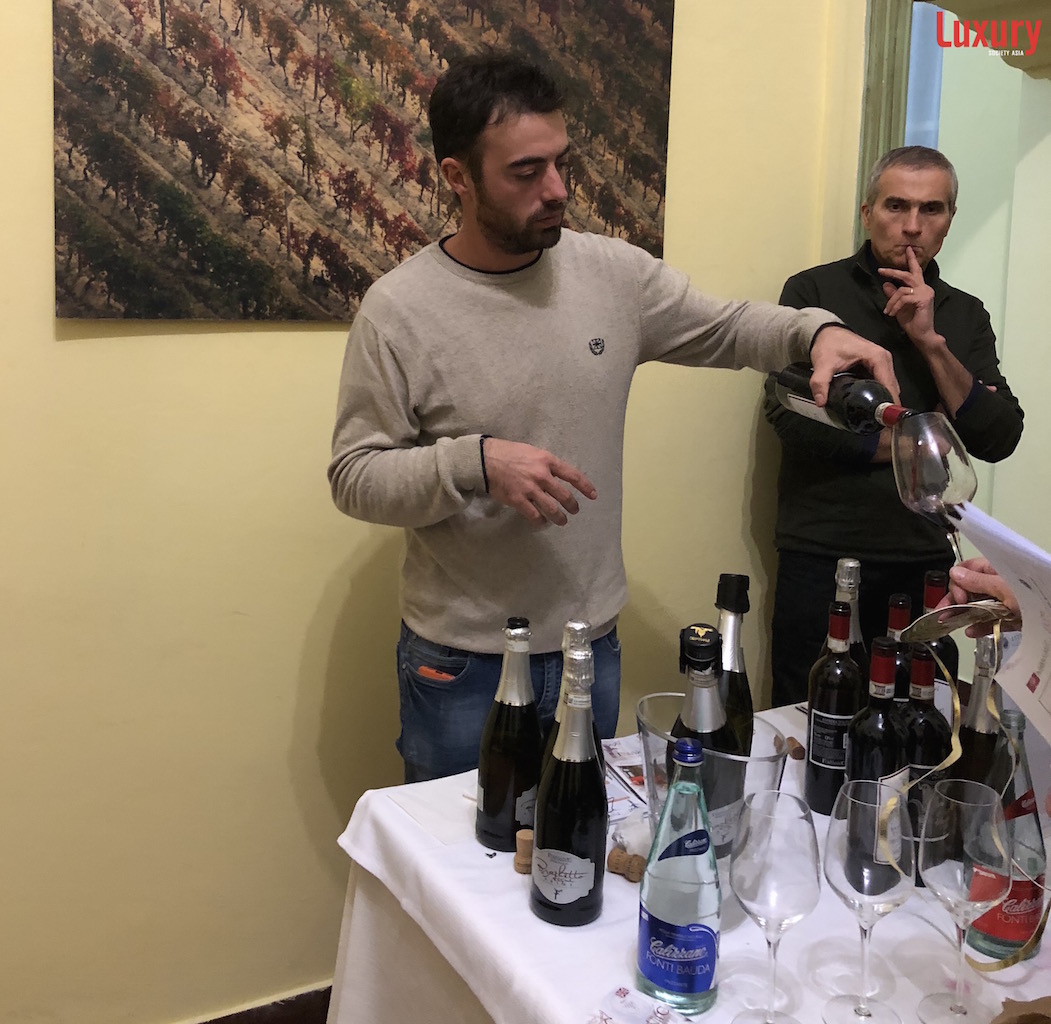 The production of dry wines made from aromatic Brachetto grapes, with low residual sugar and sometimes a certain degree of effervescence, goes a long way back in history and is in line with the special oenological interest of this Monferrato varietal, grown in the area between Nizza Monferrato and Acqui.

Acqui docg Rosé Spumante is fermented using the Martinotti-Charmat Method. Smooth and aromatic, with a floral bouquet, a pleasant aftertaste of red berries and a fresh, elegant finish, it is suitable for every season and every moment of the day. A wine with great personality, that confirms the uniqueness of the history of its land of origin and the spumante tradition.

Why is Acqui docg Rosé Sparkling so unique: Surprisingly to learn that Brachetto d’Acqui mostly consumption within Italy, 30% export to USA, 10 % to Switzerland, Denmark, Netherland and Asia. I do hope that we can sip them again with good friends in Thailand soon.