Thailand in addition to its world-renowned Thai cuisine has emerged as a gourmet paradise in Asia thanks to chefs from around the world either setting up base in Thailand or stopping by to cook up a storm during food festivals and promotions. Many of these chefs are Michelin-starred. But it was David Thompson’s Nahm Bangkok that first focused attention on Bangkok when it took the 50th place in the World’s 50 Best Restaurant 2012. The following year with the inauguration of Asia’s 50 Best Restaurants 2013, Bangkok took 10 per cent of the places with five restaurants in Bangkok on the list. In just four years that number has nearly doubled – nine of Asia’s 50 Best Restaurants 2017 are in the Thai capital. Today, Thailand is positioning itself as a haven for gourmet food festivals.

Taste it all 2017 @Ratchaprasong

The Tourism Authority of Thailand (TAT) is supporting ‘Taste it all 2017 @Ratchaprasong: The Royal Delights – Pheasant Festival’ organized by the Ratchaprasong Square Trade Association (RSTA). The food festival runs from now until 31 October. The annual festival, celebrates its 14th anniversary this year and offers amazing dining experiences to local and international visitors helping promote the district as ‘The Best Dining Destination’ in Bangkok.

Pheasant has been chosen as the highlight of this year’s Taste it all 2017 @Ratchaprasong . The lean meat, which is chewy but tender, is quite a delicacy and and an excellent choice for health conscious foodies. In Thailand, pheasant comes from the Royal Projects, which began experiments with pheasant farming in 2004. 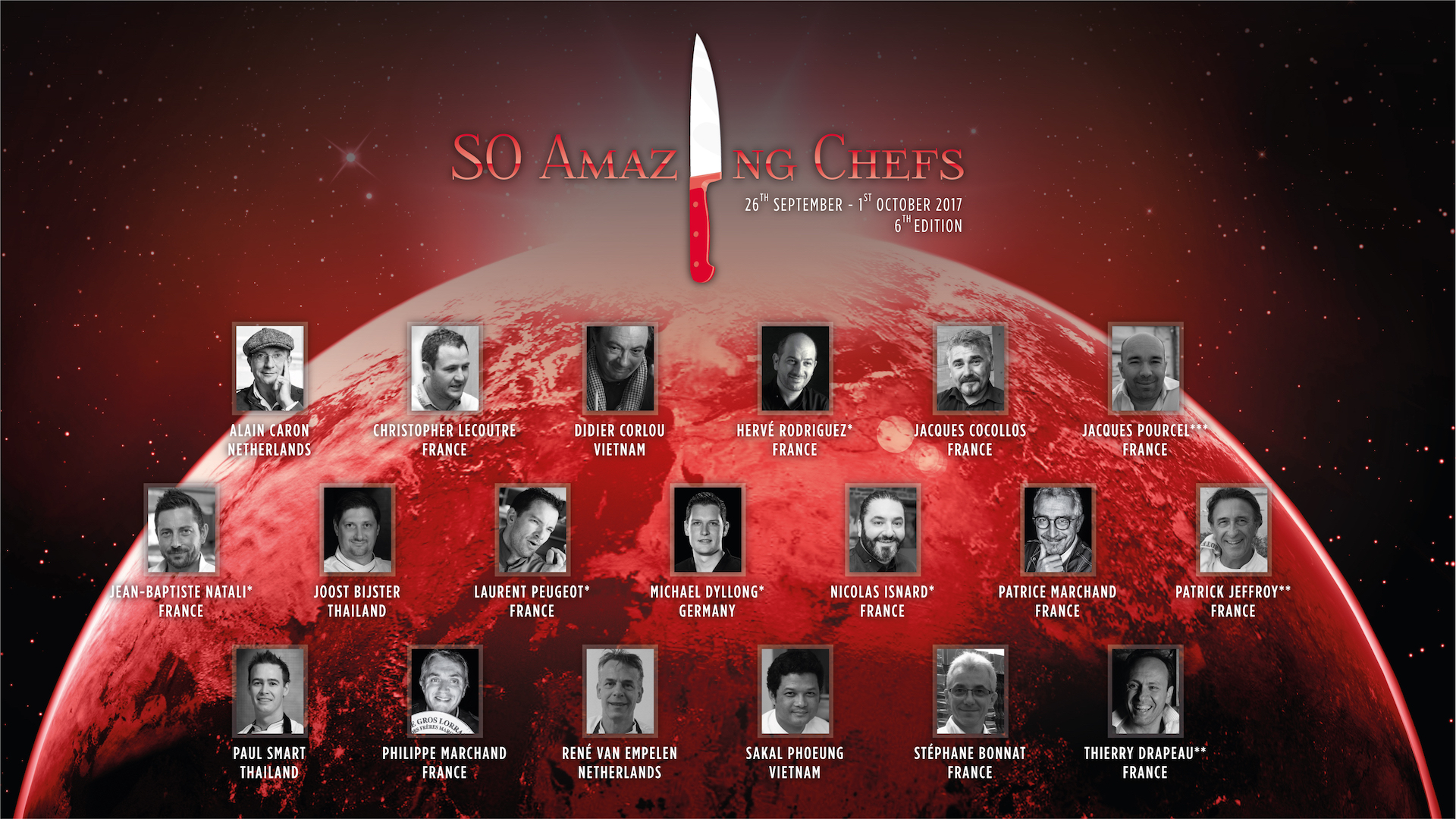 From Tuesday 26th to Sunday 1st October SO Sofitel will host 12 chefs who between them share a total of 12 Michelin Stars. For six days on the agenda are five themed degustation dinners, five exclusive private chef’s table dining opportunities catered by the SO Amazing Chefs, a weekend brunch, and three once-in-a-lifetime cooking classes hosted by the chefs themselves. In addition there will be a cheese evening, an oyster feast and a series of after parties.

New gastronomy professionals who are joining this year include: Read more One of the longest running food festivals, this year it marked its 18th edition from September 4-10, 2017 at the Anantara Siam Bangkok. This year the World Gourmet Festival partnered with Sanpellegrino to invite Michelin-starred chefs as well as chefs who are on the World’s 50 Best Restaurants and Asia’s 50 Best 2017 lists.  Read more 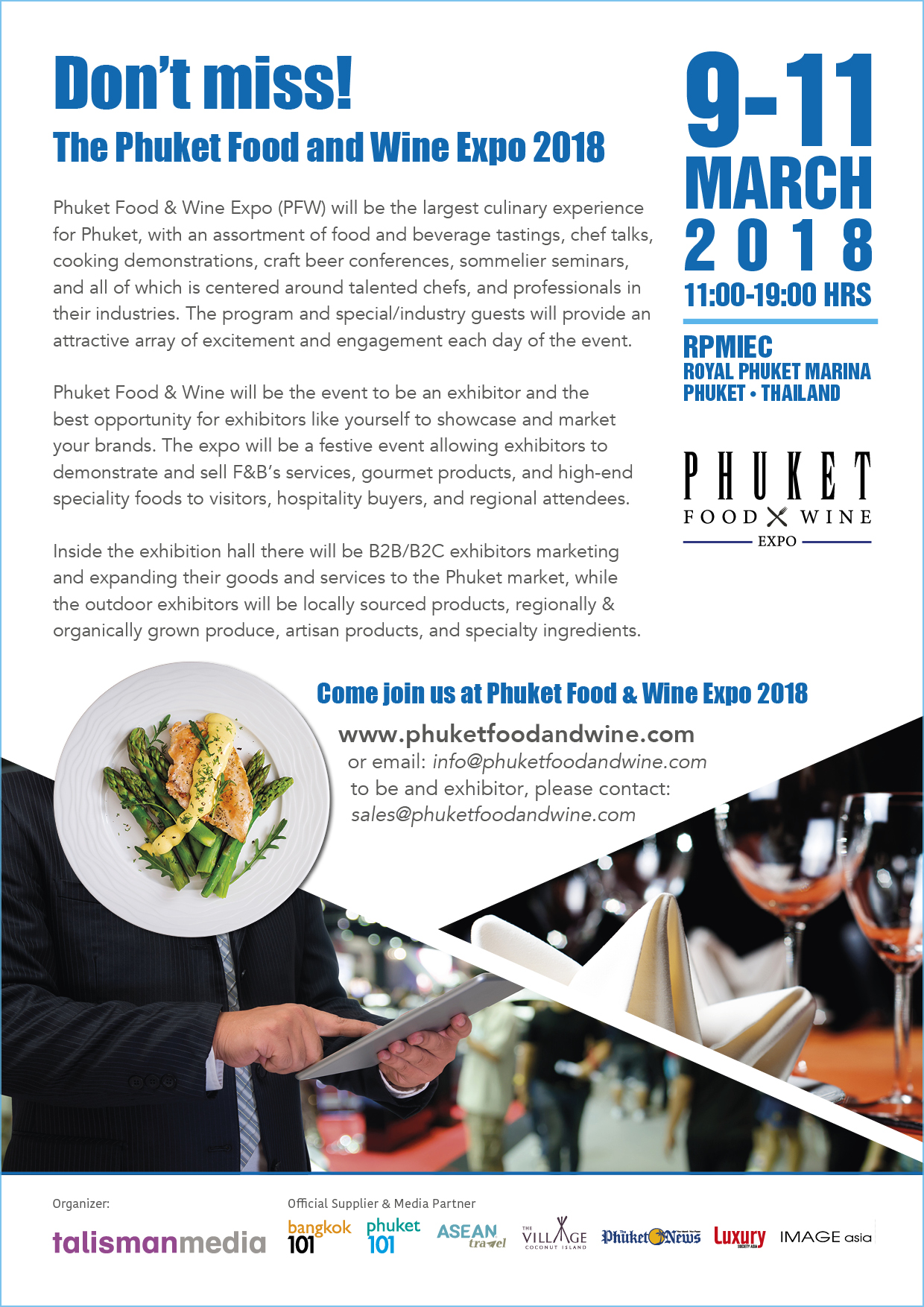 This exhibition labelled, as “The Food and Beverage Event of the Year” will attract more than 80 international exhibitors and 3,000 plus visitors to this one-of-a-kind industry event. Besides a comprehensive exhibition, Phuket Food & Wine 2018 features a programme packed with engaging food and lifestyle events, including a gourmet farmers’ market, charity dinner, live cooking demonstrations by celebrity chefs, fashion events and live entertainment.  Read more