Loy Krathong (Loi Krathong), one of Thailand’s most enchanting annual festivals. Loy Krathong, is celebrated on the night of the full moon in the 12th month of the traditional Thai Lunar Calendar. In the Western calendar and known as the “Festival of Light”

The history of the Loy Krathong Festival is rather obscure. Some people claim that the tradition of Loy Krathong originates in Sukhothai and was first organized by a court lady called Nopphamat. Others believe it was a Brahmanic festival that was adapted by Thai buddhist to honor the Buddha. Anyway, the ritual of Loy Krathong is about paying respect to the Goddess of the Water showing gratitude for the plentiful use of water and ask for forgiveness in the ensuing pollution. It is also about getting ride of misfortune and bad things that happened in the past and asking for good luck in the future. For this people float a “Krathong” in the river. 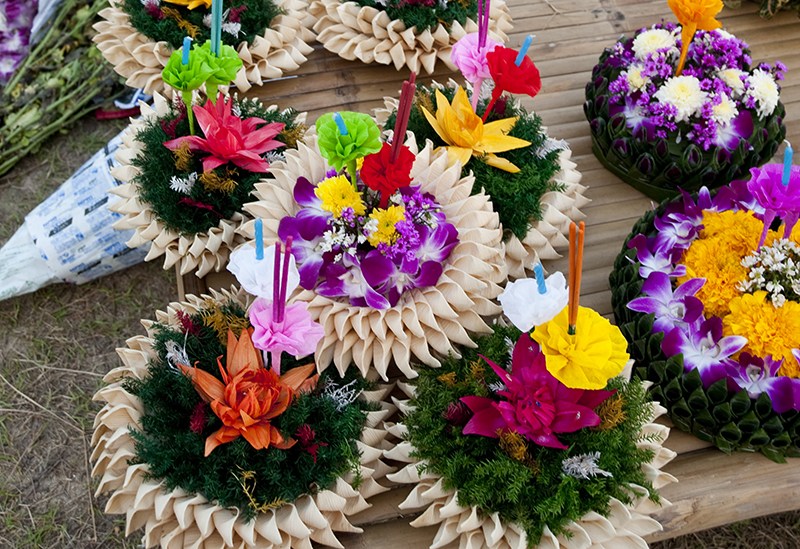 The Delightful Colours of the River, Loi Krathong Festival, Bangkok

Featuring Thai cultural activities that reflect the unique Thai traditions and ways of life while promoting distinctive Loi Krathong practices of different destinations around the country.

Chiang Mai Yi Peng Festival to celebrates traditions and activities that are unique to the Lanna people and their culture.

Opening Ceremony of the Yi Peng Festival at the area in front of the Tha Phae Gate.

Mister and Miss (Thephi-Thepphabut) Yi Peng Contest at the area in front of the Tha Phae Gate.

Spirit House and Chedi Khao Worship Ceremony, as well as asking the Goddess of the Ping River for forgiveness at the Chiang Mai Municipality Office, Wat Si Khong Pier.

Handmade Krathong Made of Banana Leaves and Fresh Flowers Contest at the Chiang Mai Municipality Office.

Releasing Lanna-style Krathong Sai at the Ping Riverside, in front of the Chiang Mai Municipality Office.

Giant Krathong Parade Contest from the area in front of the Tha Phae Gate to the Chiang Mai Municipality Office.

Fireworks Display at the Ping Riverside, in front of the Chiang Mai Municipality Office.

Music for Creativity, Culture for Happiness in front of the First Church of Chiang Mai – close to the Nawarat Bridge. 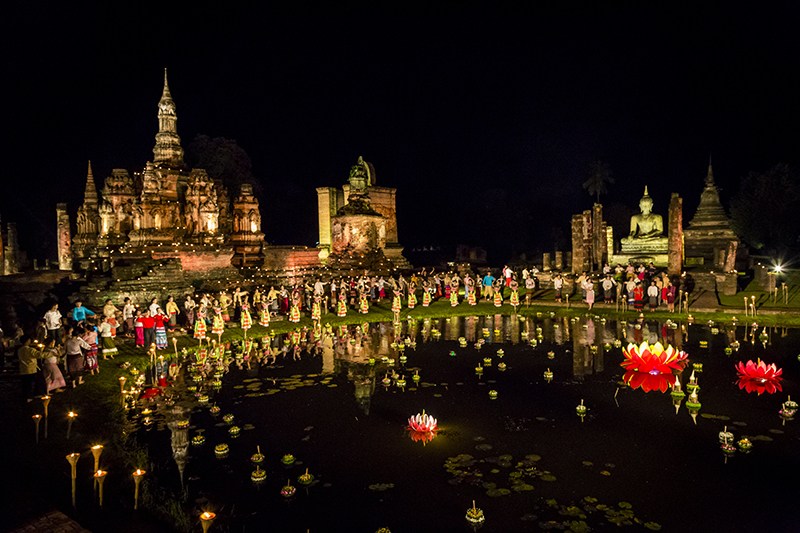 Sukhothai Loy Krathong and Candle Festival The glorious era of the Sukhothai period with the magnificent Sukhothai Historical Park, a UNESCO World Heritage Site, as the setting for the festival’s activities.

Exhibition at Lan Pho at the back of Wat Chana Songkhram.

Light and Sound Performance at Wat Maha That.

The Legend of Thao Si Chulalak Performance at the pond of Wat Sa Si (Traphang Trakuan).

Tak Loy Krathong Sai Festival is famous for its Loi Krathong Sai or the floating of a long line of coconut shell krathongs.

Releasing of the nine Royal Inauguration Krathongs and Lanterns, each from His Majesty King Vajiralongkorn and the other eight members of the Royal Family, Krathong Sai Boat Procession, and 7 threads of the Krathong Sai Processions at the area in front of the Shrine of King Taksin the Great

The Opening Ceremony & the Floating of the Loi Krathong Sai Festival and a Thousand Floating Lanterns 2019 at Lan Krathong Sai by the Ping Riverside, at the foot of the Somphot Krung Rattanakosin Song Roi Pi Bridge.

Experience traditional food for dinner at Lan Krathong Sai by the Ping Riverside, at the foot of the Somphot Krung Rattanakosin Song Roi Pi Bridge. 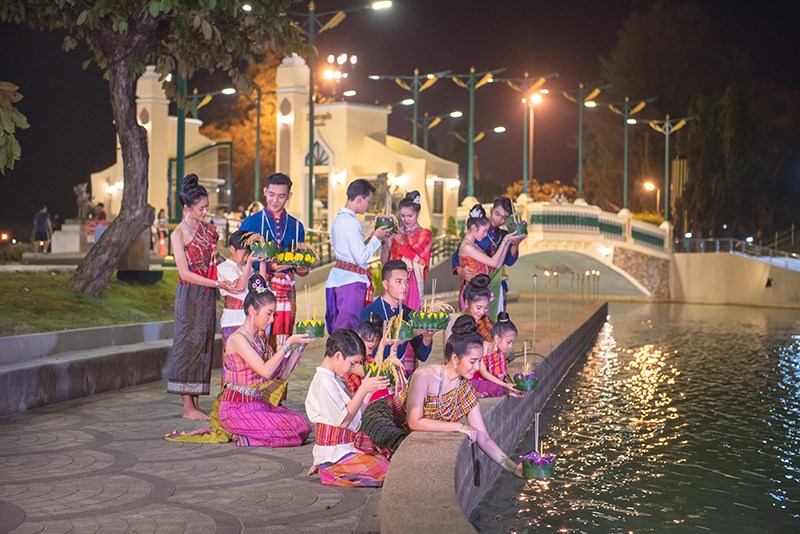 Roi Et “Somma Nam Khuen Pheng Seng Prathip” is one of the province’s most important Buddhist events that celebrates the history and culture unique to the Saket Nakhon (former name of Roi Et) people.

As well as Bangkok and the six unique destinations that TAT provides support for the Loi Krathong celebrations, local and international tourists can enjoy the ‘krathong’ floating activities at different locations all over the country.

Ratchaburi Loy Krathong Si Festival at Wat Sai Ari Rak, celebrates traditions and activities that are unique to the Mon people living along the Mae Klong River, including floating krathong cups made from eco-friendly colour paper and taking part in Buddhist ceremonies to pay respect to the Buddha.

In addition to the Loi Krathong celebrations in Samut Songkhram, Chiang Mai, Sukhothai, Tak, Lampang, Roi Et, Ratchaburi and Ayutthaya, the Loi Krathong Festival is celebrated throughout Thailand with activities and events varying depending on the location. 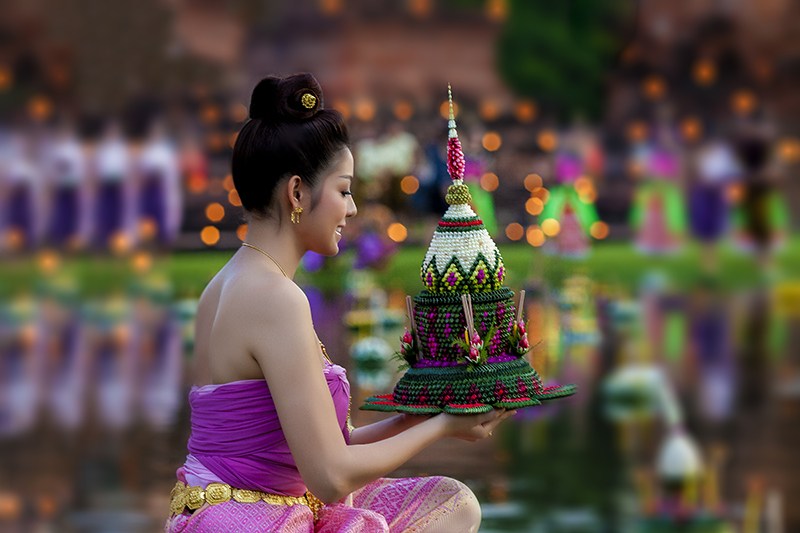 ‘Loy’ means to float, and ‘krathong’ is a small basket made from the stem and leaves of the banana tree and decorated with flowers; it also holds a candle, incense sticks, and an offering of money. At sundown, Thais take these krathongs to a canal, river, pond, and swimming pool or to the sea to float them asking the Goddess of Water (Pra Mae Khongkha) for good luck in the future and forgiveness.

In North Thailand the Loy Krathong Festival coindices with the Lanna festival called Yee Peng or Yi Peng. That makes experiencing the festival in Chiang Mai extra special. Yee Peng is all about lanterns. The day before Loy Krathong is called Yee Peng but during the three days you will find lanterns everywhere. Houses and temples are decorated with lanterns and on the evening of the first day there is a stunning lantern parade in Chiang Mai. The most stunning though used to be the hundreds of sky lanterns that were released. There used to be a mass release of sky lanterns near Mae Jo University. In recent years there has been a crackdown on releasing sky lanterns because of the danger to air traffic. There is no mass release anymore. Releasing sky lanterns is only allowed during set hours on the full moon night. This law is strictly enforced. There are a couple of commercial small scale sky lantern events that include a dinner. Please check with us.

For Chiang Mai: Loy Krathong Classic tour that features not only the Loy Krathong festivities but also sights such as Wat Doi Suthep and Lamphun.  You will also make a relaxing ride with a traditional bicycle taxi (samlor). The tour also offer a Loy Krathong tour that takes you from Chiang Rai to Chiang Mai. All these tours can be customized for each guests.

For Chiang Rai: Anantara Golden Triangle Elephant Camp & Resort Make a wish as you release your candlelit krathong into the Mekong. Marvel at the twinkling sky above as you light your Yi Peng flame-lit floating lantern. Feast on an authentic Northern-style wok-to-table dinner at Sala Mae Nam.

There couldn’t have been a more perfect setting. The full moon illuminated the glinting spires and castellated western walls of the Grand Palace, Bangkok’s spiritual heart, while the Chao Phraya River, which runs like a silver ribbon of Thai history from the Central Plains to the sea, was alight with krathongs bobbing on the rippling waters.

Around the park were displays explaining the traditions of Loy Krathong, but visitors also got to see how the krathongs are made and could sample festive foods; such as, sweet golden foi thong(sweetened egg yolk). Meanwhile, the riverbank was crowded with revellers lining up to float their krathongs and enjoy the illuminated boat procession.

Moving in tandem, nine brightly lit vessels, many decorated with characters from Thai mythology or fitted out like Chinese junks floated past, spewing forth fireworks and providing floating stages for displays of Thai dancing. The TAT-sponsored vessel took the main prize; its impressive elephant figurehead leading the parade of boats down the river in a stately manner.

On stage, cultural shows gave visitors a taste of different celebrations up and down the country. Highlights included sparking sword fight displays, Muay Thai bouts and contemporary dance that added a modern element to the traditional events.  On Loy Krathong night itself, an extended khon dance was staged with scenes from the Ramayana. In these meticulously choreographed epics, masked performers convey the meaning and drama in seemingly subtle movements. These days, such dancers are usually only seen in snippets so this extended display was a real treat for visitors who were able to catch one of the most exquisite aspects of Thai culture.

Adding a feminine touch and sparkling smiles to this already illuminated event were the lovely ladies of the Miss International Contest who showed up to take part in a traditional ‘Noppamas’ beauty show. These pageants are a new but popular part of Loy Krathong and the finalists, who hailed from all over the world, were dressed in traditional Thai costumes and drew more admiring glances than the evening’s fireworks that brought the evening to a close.