Thai boxing is a combat sport of Thailand that uses stand-up striking along with various clinching techniques. This discipline is known as the “Art of Eight Limbs” as it is characterized by the combined use of fists, elbows, knees, and shins. Muay Thai became widespread internationally in the 20th century when practitioners from Thailand began competing in kickboxing, mixed rules matches, as well as matches under Muay Thai rules around the world.

As the ringside atmosphere is fuelled to fever pitch by the buzzing musical instruments and roars of the crowd, the young fighter attacks.  After a dazzling flurry of fists and kicks, some too fast to see, his opponent falls back defeated and another Muay Thai boxing match has come to an exciting climax. 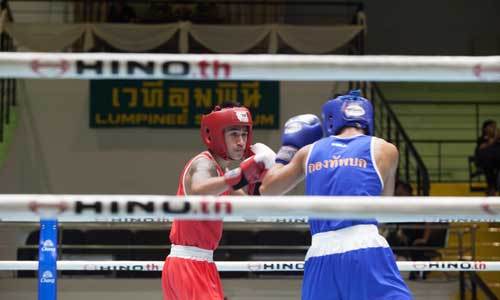 This is a scene that is played out nightly in Thailand’s boxing stadiums as young fighters compete in a martial art that remains uniquely Thai. After all, the Thai people follow all kinds of sport, but Muay Thai is in their blood and has been for hundreds of years since the ancient fighting techniques were developed when the nation was at war with its neighbours. And over the last few years, this exhilarating martial art has caught the imagination of the world. And they want to know more about Muay Thai and its long traditions.

Wai Khru Muay Thai annual event held in Ayutthaya, Thailand. It’s the ceremony which all Muay Thai fighters should attend to pay respect and gratitude toward their families and teachers who teach them the art of Muay Thai.

The World Wai Khru Muay Thai Ceremony 2018 has helped to ensure proper preservation of Thailand’s martial arts for future generations. This year marks the 14th edition of this internationally-recognized event.

The World Wai Khru Muay Thai Ceremony held in Phra Nakhon Si Ayutthaya from 16 to 17 March 2, saw over 1,800 international disciples of the art of Muay Thai from over 60 countries attending to pay respect to the Muay Thai’s teachers in a heart-warming ritual.

Below are some photos of the event

International Muay Thai fighters and other visitors were able to enjoy the historic environs of Ayutthaya Historical Park and experience traditions, such as, Yantratattooing and lettering. There were also several Muay Thai exhibition fights as well as examples of other types of Thai martial art. There was also the chance for boxers to test their skill in fun contests and to meet their heroes, such as, renowned fighter Buakaw Banchamek.

The highlight was the moving ceremony itself during which the  1,400 fighters gave a traditional show of respect to Muay Thai masters and Thai Kings, including King Naresuan the Great.  Famous Muay Thai fighters Buakaw Banchamek, Samart Payakaroon, Anuwat Kaewsamrit and Saengmani Umkatongchiangmaiyim then led the boxers from 52 nations in the Wai Kru dance, which is an essential element of the Muay Thai tradition.

Perhaps the most famous of the early Muay Thai fighters was Nai Khanomtom, who won his freedom after the fall of Ayutthaya by defeating 10 Burmese boxing champions when he was being held captive in Burma in 1774. To this day his feat is celebrated every 17 March, now called Muay Thai Day in Thailand and a ceremony is held to pay respect at Nai Khanomtom’s statue in Ayutthaya.

These days, Muay Thai is more regulated to ensure the safety of fighters, but it’s still known as the art of eight limbs, due to it being a full contact discipline with fighters using their feet, legs, knees, fists, hands and elbows to strike opponents in fights of five rounds that last three minutes each. The mentally and physically taxing sport now has passionate followers in every country, and they train hard to emulate the skills of the Thai masters past and present.

The sport of kings and commoners

King Naresuan the Great (1555-1605) was a king of the Ayutthaya Kingdom and used to promote Muay Thai among the soldiers and citizens as a way of protecting the nation. The King was a skilled fighter himself as many Thai kings have been over the years. The warrior King Prachao Sua, loved Muay Thai so much that he would enter tournaments around Thailand, in disguise, so that no one would be too intimidated to fight him. He is now fondly remembered as the Tiger King.

Between the reigns of Rama I the Great and Rama V the Great, both huge Muay Thai fans, the sport became codified and was made part of a military curriculum. Gloves replaced the hard ropes fighters would use to wrap around their fists, weight classes were introduced and arenas were opened up nationwide.

Many young rural Thais today join training schools hoping to become legends of the ring. From a young age, they undergo vigorous training and have taken part in hundreds of fights before they are even in their 20s. For many, Muay Thai offers a chance at fame and fortune and allows them to earn money to send back to their families.

The World Wai Kru Muay Thai Ceremony has been held annually since 2004. In 2018, some of Thailand’s best-known fighters: Buakaw Banchamek, Samart Payakaroon, Anuwat Kaewsamrit and Saengmani Umkatongchiangmaiyim will lead international Muay Thai boxers in the moving ritual that pays respect to their teachers.

Where to watch a Muay Thai fight

If you want to enjoy the action of a bout of Muay Thai, it’s possible to find boxing venues up and down the country. But to see the biggest names in the sport, you must spend an evening in the legendary Bangkok venues of Rajadamnern Boxing Stadium or the famous Lumpinee.

Lumpinee Boxing Stadium, which opened in 1956, is the arena in which all young Muay Thai fighters dream of competing; after all, this is where the giants of the sport made their names. But the original stadium on Bangkok’s Rama IV Road closed down in 2014, and the action has move to a gleaming 8,000-seat venue on Ramintra Road, which still boasts the biggest fights in the kingdom; it’s worth a visit if you want to experience the atmosphere of Muay Thai.

Ticket prices depend on where you want to sit and it’s often tempting to go for the ringside seat, but the real fans are found in the second tier, and it’s the way they cheer their champions and follow every blow, block and kick that makes for the most memorable experiences.

The more central stadium on Ratchadamnoen Avenue is one of Bangkok’s most venerable institutions – the first fight there was held in December 1945. It is an atmospheric venue and was the setting for the Muay Thai boxing scenes in the James Bond movie, The Man with the Golden Gun, which was the first exposure many Westerners had to Thai martial arts. The venue is still going strong with fights taking place on Mondays, Wednesdays, Thursdays and Sundays.

If you’re not in Bangkok, there are smaller Muay Thai events all over Thailand and fights are often staged in tourist destinations; such as, Chiang Mai, Pattaya, Phuket, and Ko Samui.

How to train in Muay Thai

For some people, simply watching an exciting Muay Thai bout is not enough. They want to learn some of the amazing moves for themselves get their bodies in the best condition of their lives. Some are even tempted to experience the adrenalin pumping action of a fight in the ring.  This is why there are now so many Muay Thai schools opening up worldwide. But for most Thai boxing devotees, the ultimate place to study the art is in Thailand itself, and they come here in their thousands to undergo vigorous training sessions and learn from Thai masters. While here, they also get to enjoy other aspects of the kingdom’s culture.

Such training camps often have Rajadamnern and Lumpinee Stadium champions as trainers, and the schedule can be gruelling, with training and exercise sessions that push you to the limit. But the foreign Muay Thai fighters that undergo this experience often claim their months or weeks training were the most rewarding weeks of their lives, and they leave the kingdom in tip top physical condition and with a greater appreciation of Thailand and its people.

The music of Muay Thai

The atmosphere at any Muay Thai competition is always heightened by the music that accompanies each fight. Known as “Sarama”, this music changes tempo based on the action in the ring and not only heightens the atmosphere but seems to encourage the fighters (not to mention the crowd) when they are flagging. The instruments used include the pi java, a type of clarinet, Klong Kak drums that are played by hand, and bronze or copper cymbals known as Ching, which are used to keep the rhythm.

In fact, the Ching are used in many types of Thai classical music, and they are heard in everything from court music to traditional shadow plays alongside stringed instruments, gongs and Thai-style xylophones known as Ranat Ek. It is the drums and the highly pitched Ching that regulate the melody of both Thai and Khmer music. The music at the Thai boxing matches often inspires visitors to hear more Thai classical and folk music. So if you want to hear more, it’s worth noting that many of Thailand’s bigger hotels have regular performances of traditional Thai music accompanying Thai dance. For more formal displays visit venues; such as, the Thailand Cultural Centre and the Thai National Theatre, which feature regular Khon shows. These are masked performances once performed for the Royal Court and feature famous characters from Thai mythology.

Perhaps the most memorable element of any Muay Thai fight is the Wai Kru Ram Muay Ceremony that takes place before each fight. This ancient tradition is performed to pay respect to the fighter’s teacher and past generations of trainers. Each Muay Thai dance is unique but all involve the boxer touching each corner post of the ring as a way of paying honour to their opponents and spirits. Some of the complex movements are said to be based upon images of the monkey god Hanuman, who appears in the Thai epic the Ramakien painted in colourful murals on the walls of Bangkok’s Grand Palace.

The Wai Kru Ram Muay Ceremony has now been opened up to Muay Thai fighters the world over thanks to an annual event held in the spiritual home of Muay Thai, the ancient city of Ayutthaya. For the past 12 years, fighters have come from around the world to meet with legends of Muay Thai boxing and to pay their respect in the ancient way.

A show for everyone

If you simply want to enjoy the spectacle and athletics of Muay Thai enhanced by theatrics and effects, do take in the Muay Thai Live show at Bangkok’s Asiatique The Riverfront. They have nightly performances that tell the story of Muay Thai and some of the characters behind the legends. With highly skilled fighting performers, and a wonderful purpose-built stage, the show is a family-friendly way to immerse yourself into the world of Muay Thai.

Muay Thai camps have evolved as well; before many of these camps that catered to foreigners focused solely on fighting or attack, but now many focus on health and nutrition, the history of the sport and even mediation. And as the number of women taking these courses continues to increase the self-defense component of the sport is being stressed.