On the morning of the final day’s racing, sailors prepared to launch in listless conditions, hopeful of getting three more races written up on the scoreboard. For the select few at the top of the fleet leaderboards, there was a sense of anticipation, a determination to hold on to (or improve) their result, and hope that the last day of racing would be a great one. The wind failed to show up though, and the final day’s racing was cut short at 2pm, thereby closing out all races and confirming the current leaders as winners. 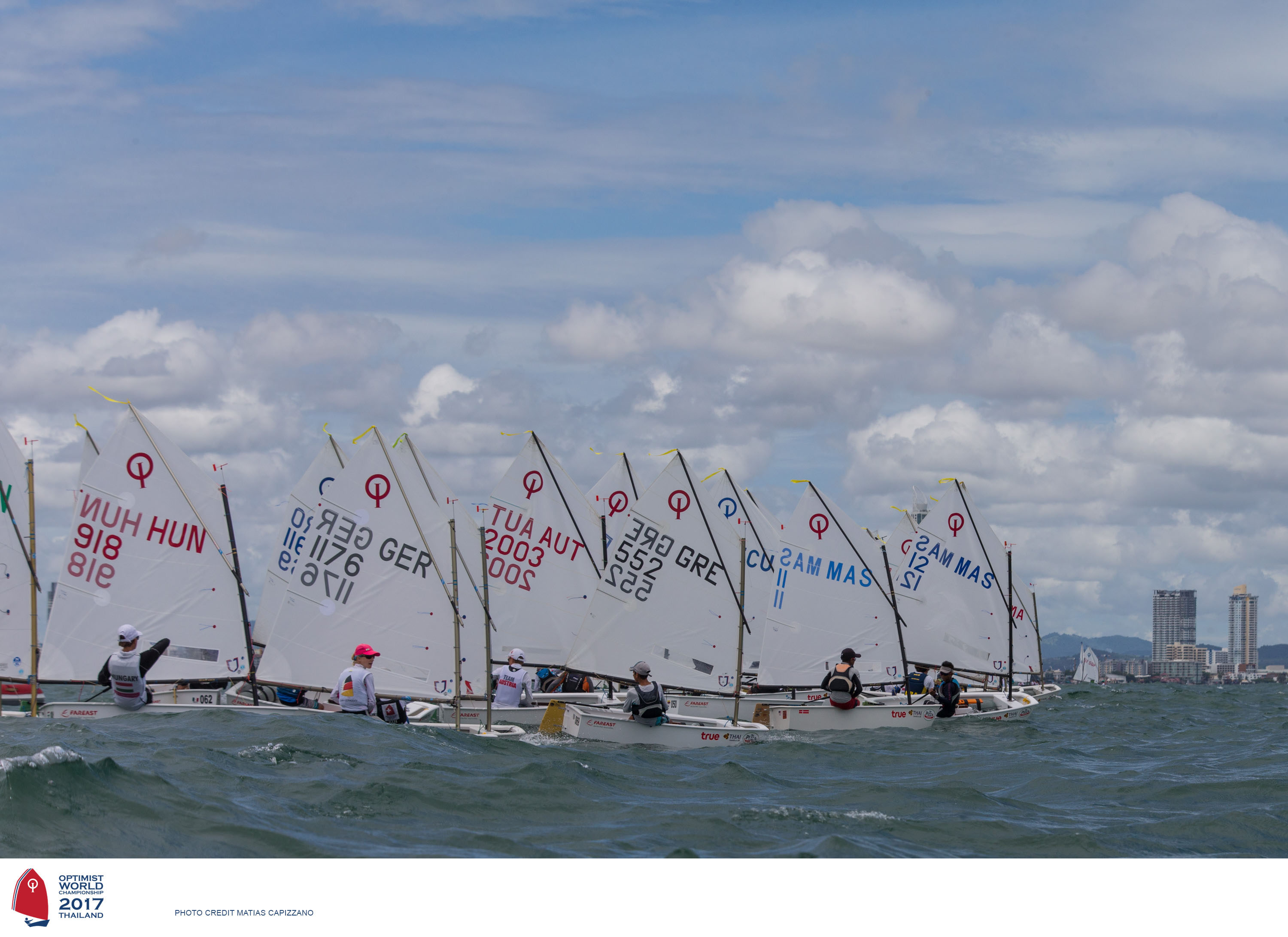 Organized by the Royal Varuna Yacht Club (RVYC), the Yacht Racing Association of Thailand (YRAT) in conjunction with the International Optimist Dinghy Association (IODA) with strong support from the Sports Authority of Thailand (SAT), the Optimist World Championship 2017 is held from 11-21 July, 2017 at the Royal Varuna Yacht Club (RVYC) in Pattaya. The event serves as an inspiration for young Thais to take up sailing, and stimulates the development of Optimist sailing in Thailand to international standards.

The Optimist dinghy has proven to be the ideal boat for introducing young children to the sport of sailing, the object of the class being to provide an affordable racing boat for young people. Optimist dinghy sailing typically starts at the age of 7 or 8 and continues to 15 years of age. More than 85% of all sailors who participated in the Rio Olympics sailed in Optimist dinghies when they were young. Thomas Whitcraft, President of the Optimist World Championship 2017 Thailand, said, “I wish to express my gratitude for the dedication and great support shown by everyone involved. Thailand has hosted a truly memorable program, as befits its reputation as one of the world’s great sailing nations. Our hope is that this competition will inspire young sailors from all countries and all backgrounds to continue with sailing, and raising their game to one day compete in Olympic competition.”

Admiral Kraisorn Chansuvanich, Honorary President of the Optimist World Championship 2017 Thailand and President of Yacht Racing Association of Thailand (YRAT), said, “On behalf of Thai people, and Thailand as this year’s host country, I would like to thank the organizing committee of the Optimist World Championship, the IODA, all of the officials, volunteers, and especially our sailors from the 62 nations, as well as the coaches and teams who have taken part in this very successful event. Congratulations to all of the winning teams and sailors this year. With record numbers of highly enthusiastic sailors participating, Thailand has thoroughly contributed to the growth of youth sailing worldwide.”

Thailand has made massive progress as a sailing nation over the last almost four decades since the championships were last hosted here. Thailand became a member of IODA under the Junior Sailing Squadron of Thailand in 1977 and produced several world-class top Optimist sailors. In 2009, Noppakao Poonpat took the honor as first female in Brazil. She went on to do even better in 2010, winning the first female event and the first overall championship at the event in Malaysia – a year when Thailand won all four trophies available, breaking the record in the history of the Optimist World Championships. 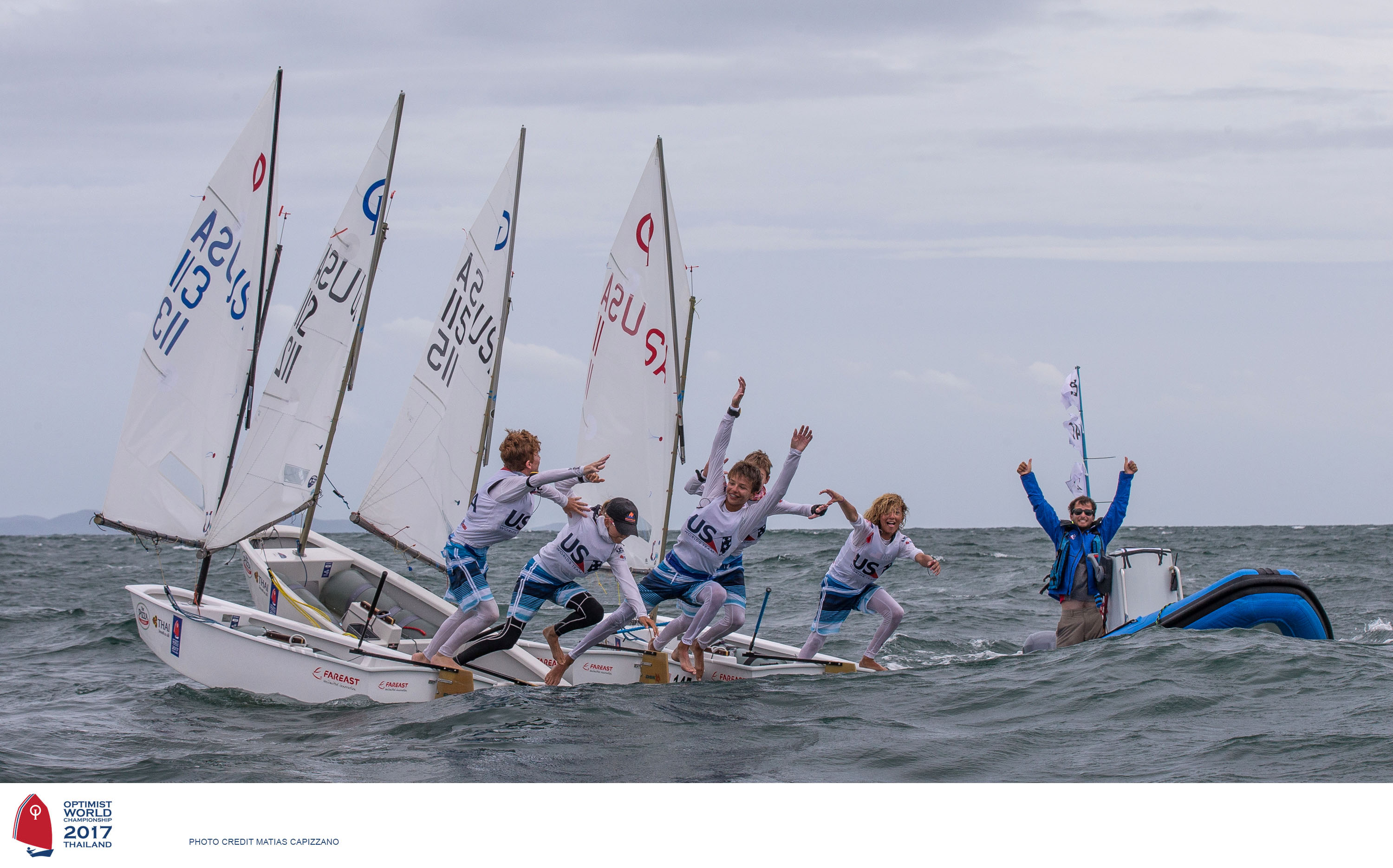 Kevin Whitcraft, the newly appointed President of the IODA, the international body that groups national Optimist associations, says, “The focus of IODA is on the never-ending development of the sport from the Optimist class upwards, and its integration with IRC racing classes in terms of creating and enhancing the sailing talent of tomorrow. In my new role, I am tasked with empowering our organization’s commitment to growing the global Optimist fleet and gaining even stronger support. The Optimist is the key gateway to allowing sailors to participate in the Olympics. My heartfelt congratulations to all winners and to every Optimist sailor who has taken part. Our young racers are in very good company, part of an international family which supports each other, and the sport of sailing both now and in the future.”

The 2017 Optimist World Championship is organized by the Royal Varuna Yacht Club with the endorsement of the Yacht Racing Association of Thailand and the Junior Sailing Squadron of Thailand under the International Optimist Dinghy Association. It is supported by strategic partners including Pattaya City, the Sports Authority of Thailand and the Thailand Convention and Exhibition Bureau. Co-sponsors include The Pizza Company, Apollo (Thailand), Thai Airways, and True Corporation.