Entries for the 2018 Multihull Solutions Regatta are flowing in says Phuket Yacht Club Commodore, Scott Duncanson. “This is the tenth running of the event and on the back of a surge in multihull popularity globally, it has grown to become Asia’s largest multihull-only regatta”. Held from the 12th to the 15th of July in Chalong Bay on Phuket’s protected east coast, this regatta has become many a sailor’s “green season” favourite due to the more consistent southwesterly monsoon winds and cooler temperatures. 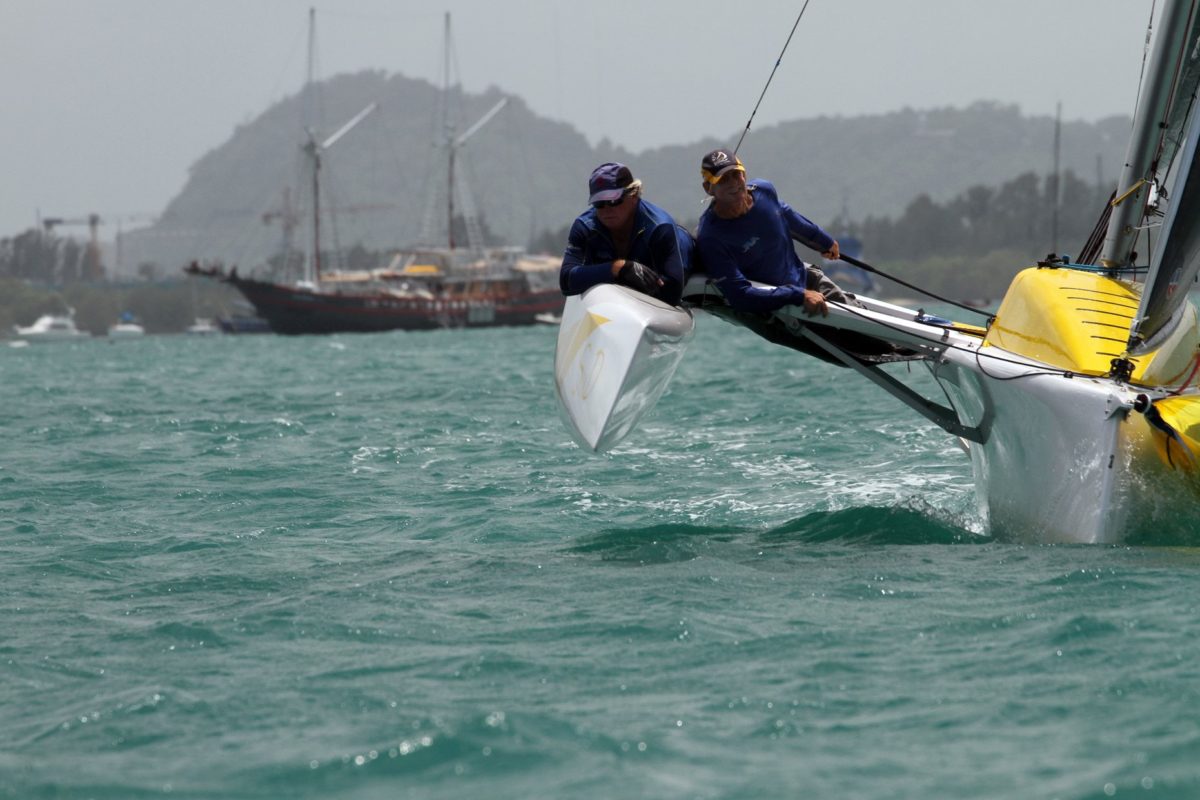 It is expected that over twenty yachts and around eighty sailors will compete in four divisions: Ocean Multihulls, Firefly 850s, Corsair Pulses and Cruising Multihulls. With participants from Singapore, Japan, Australia and as far away as the United Kingdom its reputation as a truly international event continues to grow. Twin Sharks return to defend its Firefly champion’s title while the absence of Henry Kaye’s Seacart 30 Thor, sold earlier in the year to an American investor throws the doors wide open in the Ocean Multihull division. 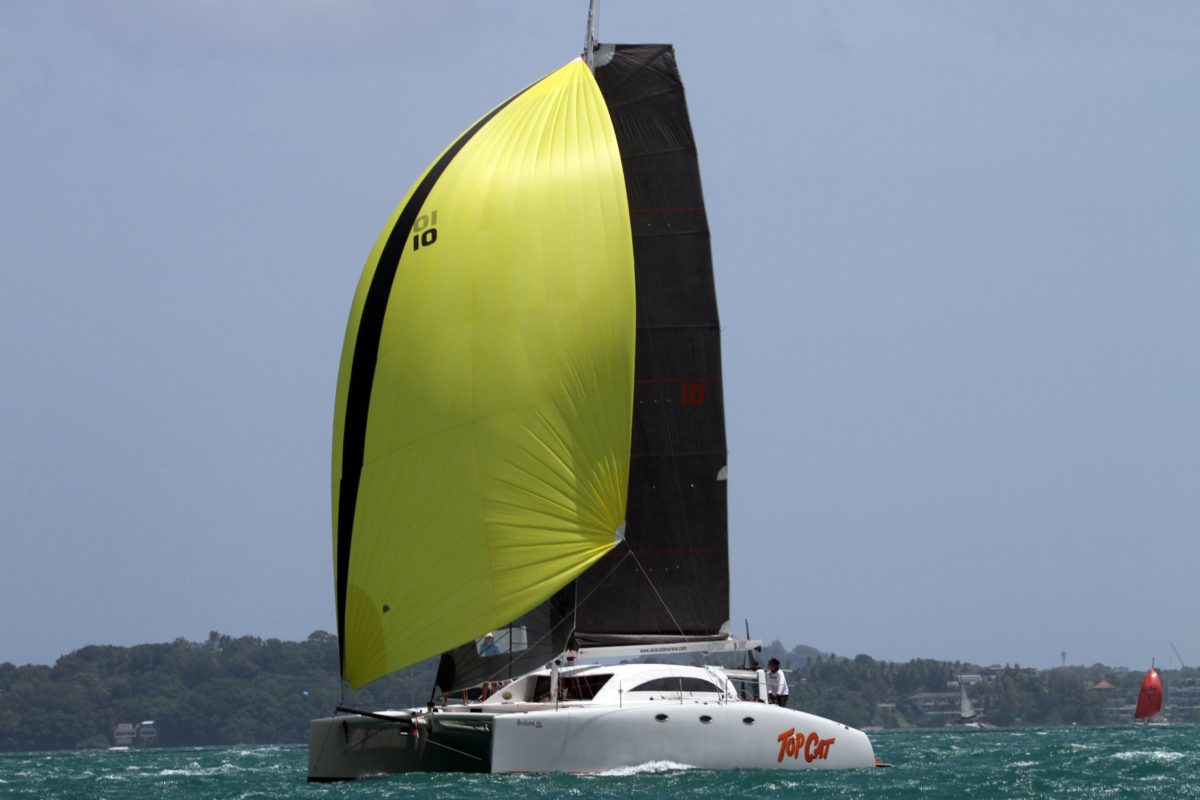 Principal Race Officer Simon James, fresh from a very successful Koh Samui Regatta, returns to manage the racing while an exciting social program is being planned by the Phuket Yacht Club organizing committee.

The locally built Firefly 850 Sports cats, designed by Aussie Mark Pescott have been the mainstay of one design racing in Phuket and when they fly their hulls, there’s much “oohing and “awing” going on. John Newnham‘s Twin Sharks has proven unbeatable over the last couple of years and will be the favourite going into this one. 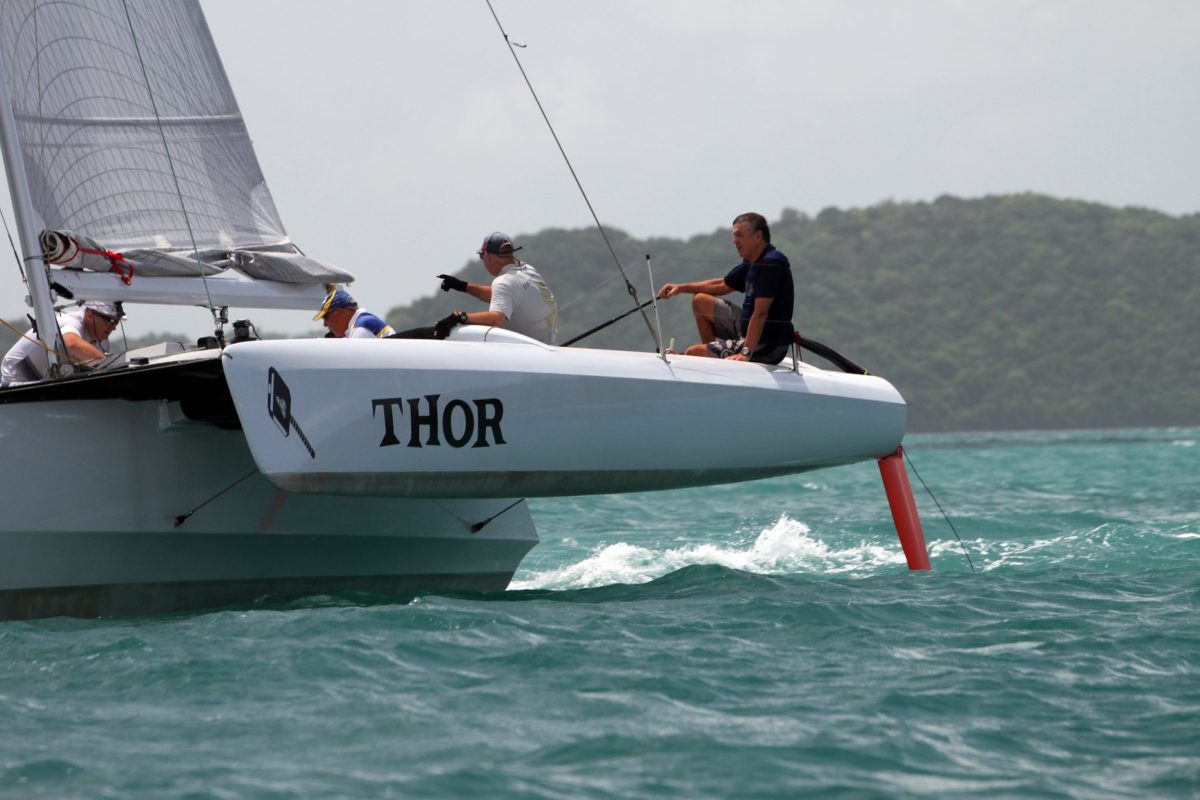 Cruising multihulls have become the boat of choice for many traveling through the Andaman region recently, so it’s just natural that people would like to put them to the test and try to race them as well.

Asia Catamarans has done wonderful work with building Stealth catamarans in Phuket and they always have a good presence in her regatta, with as many as half a dozen of their boats lining up in the MSR before. Their Stealth 14GT Wow recently won the St Maarten’s Heineken Regatta in the Caribbean.

As it’s only a three-day regatta, there are no drop races, so crews need to be on their toes from the get-go, as they can’t afford to make any serious mistakes for fear of falling behind early. 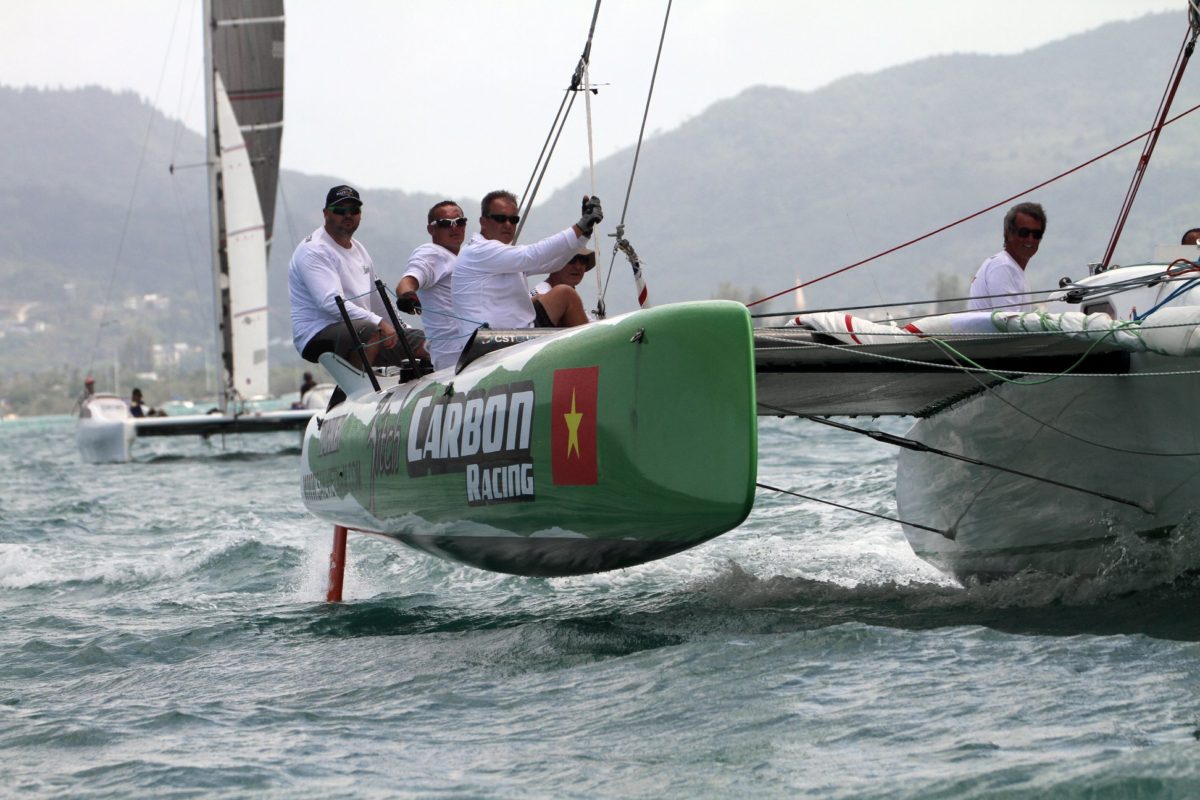 The Pulse 600 class, made by Corsair Marine in Vietnam, is the other one-design class in the regatta. Four two-man trimarans owned by Java Yachting have attracted sailors from overseas and some like Mick Tilden have become particularly smitten with them. These boats, which have been used previously for match racing in Krabi, and Phuket, will do battle against Andrew deBruin’s Multihull Solutions H30.

Multihull Solutions’ title sponsorship has seen this regatta grow and thrive in the last four years. de Bruin, the company’s general manager for Asia, summed up the regatta best: “Three days of sailing around Chalong Bay in strong wind with a bunch of like-minded people, gathering at the Phuket Yacht Club bar afterwards, to regale each other with tall tales of their exploits, over a few cold beers – what more could you want?” 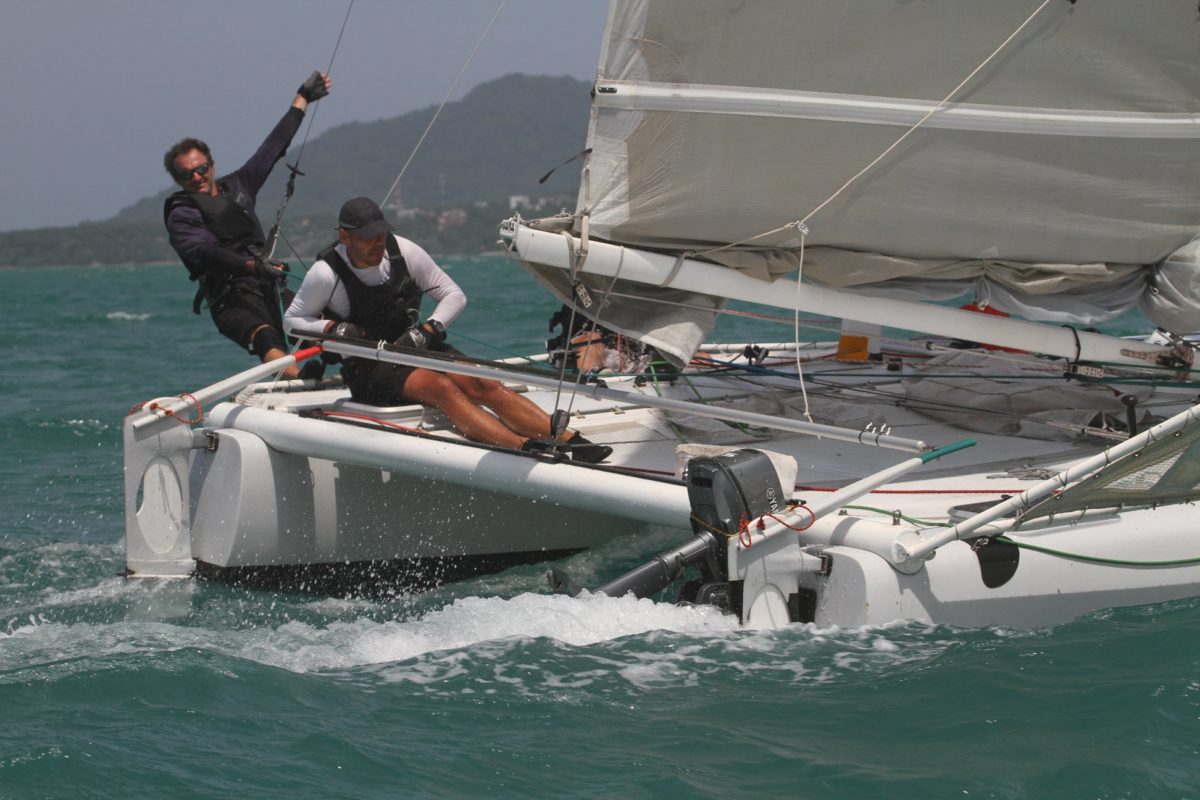 Surf Patrol’s spectacular nosedive and capsize in the MSR last year was says skipper Ray Waldron, “a baptism by fire, but I think this quote may sum it up. ‘If you dare to dream you will no doubt have a few nightmares along the way’. That was ours for 2017. We’ll bounce back, we always have.

Regarding expectations, Ray says, “Of course, we’d like to do well but provided we sail well, do our best and enjoy ourselves in the process, I’d be happy. Our entry into multihulls & the Firefly class is a three-year program, as I suspect it may take this long to get our heads around racing these machines before we finally hit our straps.” 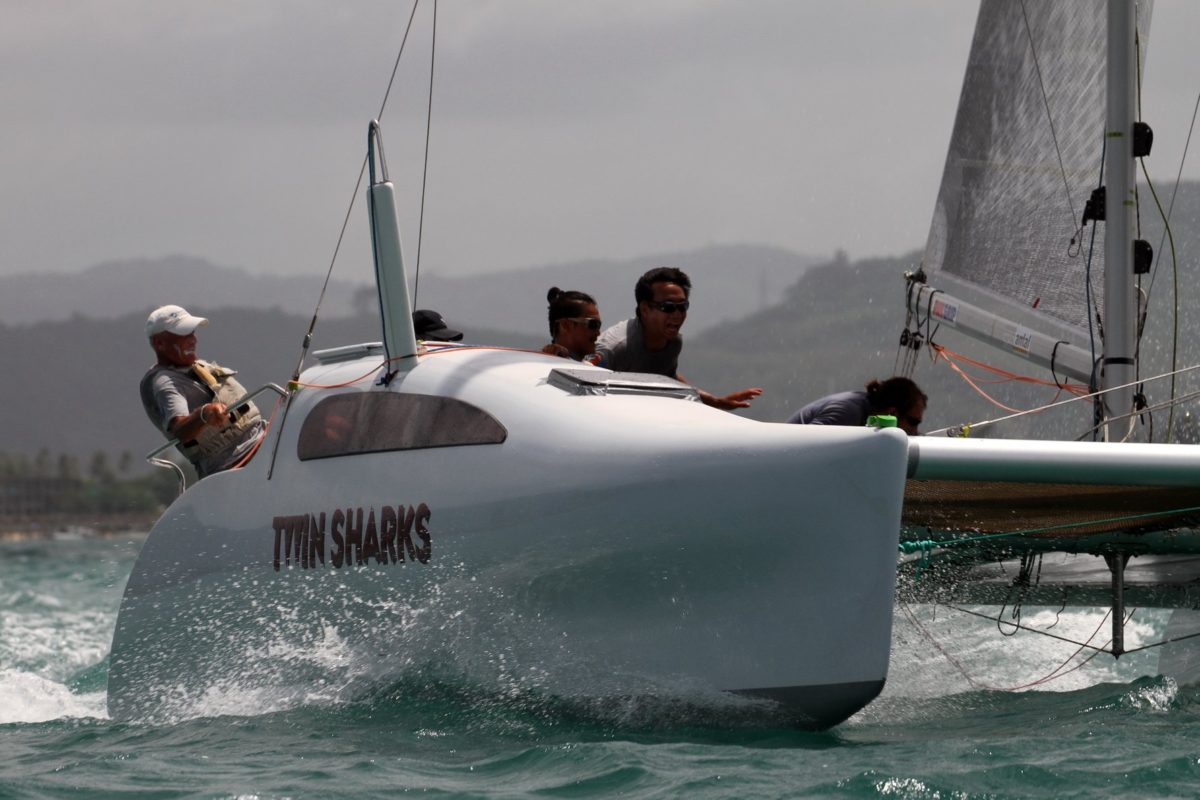 While many regattas have suffered from the lack of wind, this regatta has consistently had good breeze making it an easy regatta for all to enjoy.

And it is a great feeder event for crews to prepare for the Cape Panwa Hotel Phuket Raceweek (July 19th – 23rd) to be sailed in the same area and many of the boats do sail both regattas.

The increasing popularity of multihull sailing is evident by the many local and offshore supporters including Phuket Boat Lagoon, Octopus Electrical, East Marine, and Java Yachting.