Thailand has been selected to host the Optimist World Championship 2017 to be organized between 11-21 July, 2017 at the Royal Varuna Yacht Club (RVYC) in Pattaya. Over 59 countries have already confirmed to compete in the event, and each country will send their most talented Optimist sailors to race as national representatives on this world stage. Organized by the Royal Varuna Yacht Club (RVYC), the Yacht Racing Association of Thailand (YRAT) in conjunction with the International Optimist Dinghy Association (IODA) with strong support from the Sports Authority of Thailand (SAT), the event is set to provide an inspiration for young Thais to take up sailing and stimulate the development of Optimist sailing in Thailand to international standards.

The Optimist Dinghy has proven to be the ideal boat for introducing young children to the sport of sailing. The object of the class is to provide an affordable racing boat for young people. Optimist Dinghy sailing typically starts at the age of 7 or 8 and continues to 15 years of age. More than 85% of all sailors who participated in the Rio Olympics sailed in Optimist Dinghies when they were young. 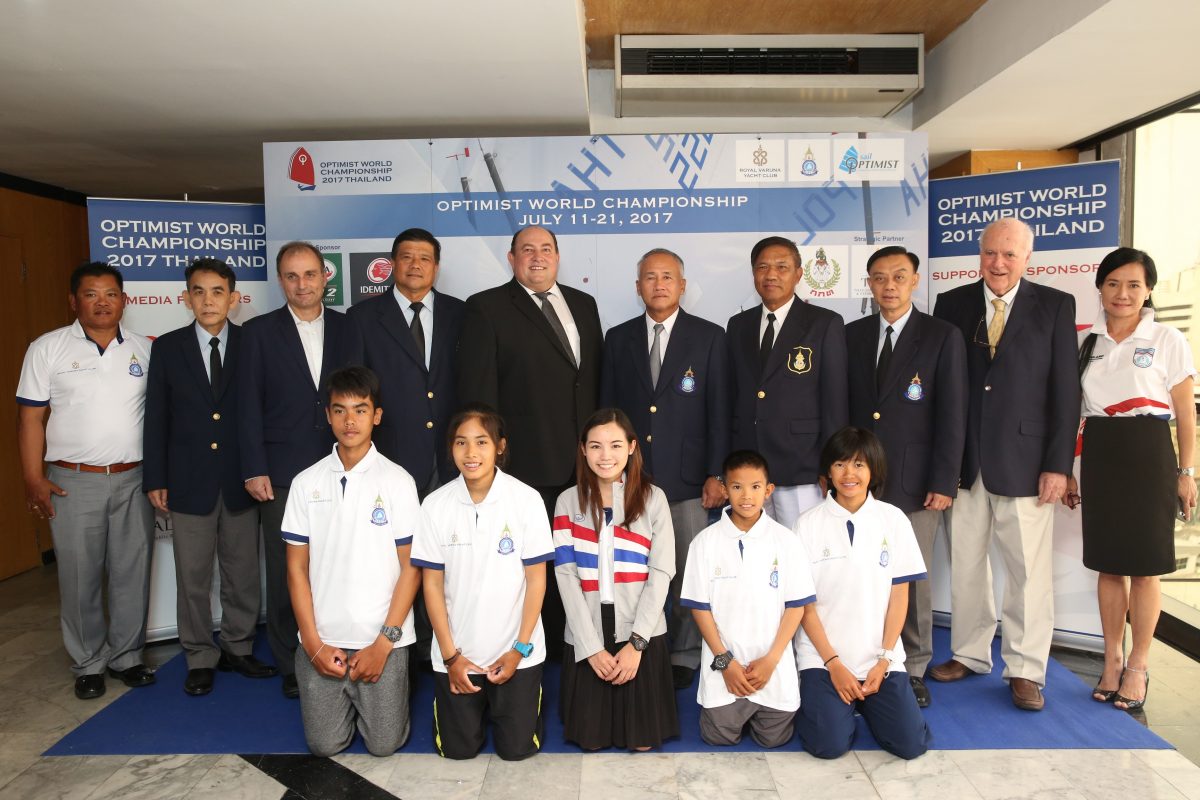 He continued, “We are blessed in Thailand to have weather that is great for sailing all year round with more than our fair share of consistent winds. Moreover, the reputation of Thailand for providing exceptional hospitality comes from its wonderful people, beautiful seas and great food, so we really are a standout world sailing destination. We would like everyone to be aware of the importance of the Optimist competition as it is the foundation of all competitive sailing.”

Admiral Kraisorn Chansuvanich, Honorary President of the Optimist World Championship 2017 Thailand and President of Yacht Racing Association of Thailand (YRAT), said, “Thailand is pleased and warmly welcomes all young optimist sailors from around the world to compete in the Optimist World Championship 2017. This event will provide an inspiration for Thai youths to take up sailing and boost the development of Optimist sailing in Thailand to international standards. Our Thai team is very much ready and has been training hard for this world class competition, so we’re expecting this to be another great year of success for Team Thailand.”

“Additionally, this is another excellent opportunity for us in that this event will also help develop sailing as a sport and provide opportunities for our young sailors in Thailand to learn and gain great experience on the world stage by competing with many sailors from around the world,” said Admiral Kraisorn.

Thailand became a member of IODA under the Junior Sailing Squadron of Thailand in 1977. With the great guidance of Al Chandler, IODA President from 1984 to 1989, Thailand has produced several Optimist World Champions. In 2009, Noppakao Poonpat took the honor as first female in Brazil. She went on to do even better in 2010, winning the first female event and the first overall championship at the event in Malaysia – a year when Thailand won all four trophies available, breaking the record in the history of the Optimist World Championships.

Peter Barclay, President of the IODA, the international body that groups national Optimist associations, says, “The IODA is in charge of the regulation and development of Optimist sailing in each country. Since being established in 1947, we have worked for 70 years to build upon the development of Optimist sailing globally, and to continue to raise the standards of the sport. We administer the International Optimist Dinghy Class in accordance with World Sailing requirements, and ensure that the Class Rules are observed.”

He went on to say, “We want to promote the International Optimist Dinghy Class and grow its reputation as a cornerstone for the development of world sports sailing. Thailand is one of the leading countries among the 118 IODA members (International Optimist Dinghy Association). It has been 38 years since Thailand last hosted the Optimist World Championship and we are delighted to be back in Thailand again after so many years. We are confident that Thailand and Event Organizers are planning a hugely successful event of competition and activities for the many young sailors from all over the world and look forward to this magnificent competition being held at Royal Varuna Yacht Club.”

About The International Optimist World Championship

The International Optimist Dinghy was first designed in 1947 by Clark Mills in Clearwater Florida. It was made out of 8 ft marine plywood and was called the Optimist Pram, as it was a project with the local Optimist Club to get young children sailing.

The Optimist Dinghy later evolved in Denmark where it transformed into the International Optimist Dinghy that it is today. Although the first boats were made of wood, fiberglass boats started to arrive in 1970. Today they are the major type of boat manufactured by over 30 builders around the world. The International Optimist Dinghy Association (IODA), the governing body of national members was founded in 1965 in Aarhus, Denmark. Today there are approximately 120 IODA member countries around the world and IODA is the largest youth sailing class in the world. Over 165,000 Optimists have been built since the start of record keeping in the 1960’s. IODA is a not for profit organization registered in Aalborg, Denmark operating out of Toronto, Canada. It is the governing body of national associations in charge of the regulation and development of Optimist sailing in over 118 countries around the world.

Under Royal Patronage, the Royal Varuna Yacht Club was founded by HSH Bhisadej Rajani and Mr.Walter J.Meyer in 1957 and other members. His Majesty the Late King Bhumibhol Adulyadej and Princess Ubolratana, both keen sailors, regularly sailed at Royal Varuna Yacht Club. Unprecedented, they both achieved first place and won Gold Medals at the 1967 South-East Asia Peninsular Games. The Royal Varuna Yacht Club (RVYC) founded in 1957 is the premier sailing club and center of dinghy sailing in Thailand, located in a secluded cove between Pattaya and Jomtien. It is a Not-For-Profit Association with a constitutional mandate to Promote Sailing in Thailand.