Thailand’s cultural heartland, things to do & where to stay in Chiang Rai

It may not have the same buzz or sophistication of larger cities and popular resort centres in Thailand’s southern tourism hubs – or even in nearby Chiang Mai – but what Chiang Rai lacks in pizazz it more than makes up for in history, culture and providing an insight into the Kingdom’s ancient past.

The most northern city in Thailand, Chiangrai is also its oldest, established as capital of the Lannai Kingdom in 1296 during the reign of King Mengrai. This was the heart of the Lanna empire, which at the time covered most of northern Thailand as it now exists as well as neighbouring parts of Myanmar, China and Laos. Back then it was bordered by Burma (Myanmar) to the west, China to the north, the Khmer Empire of Angkor (now Cambodia) to the east and Siam (now Thailand) in the south. Meaning “the kingdom of a million rice fields”, Chiangrai was also the food bowl of the region and, in more modern times, a key part of the infamous Golden Triangle that was the centre of Asian opium production and the heroin trade.

Today, the only signs of opium and heroin are in an excellent Opium Museum at Chiang Saen, right on the border with Laos, which depicts the 5000-year history of growing, trading and using the now-illicit drug. 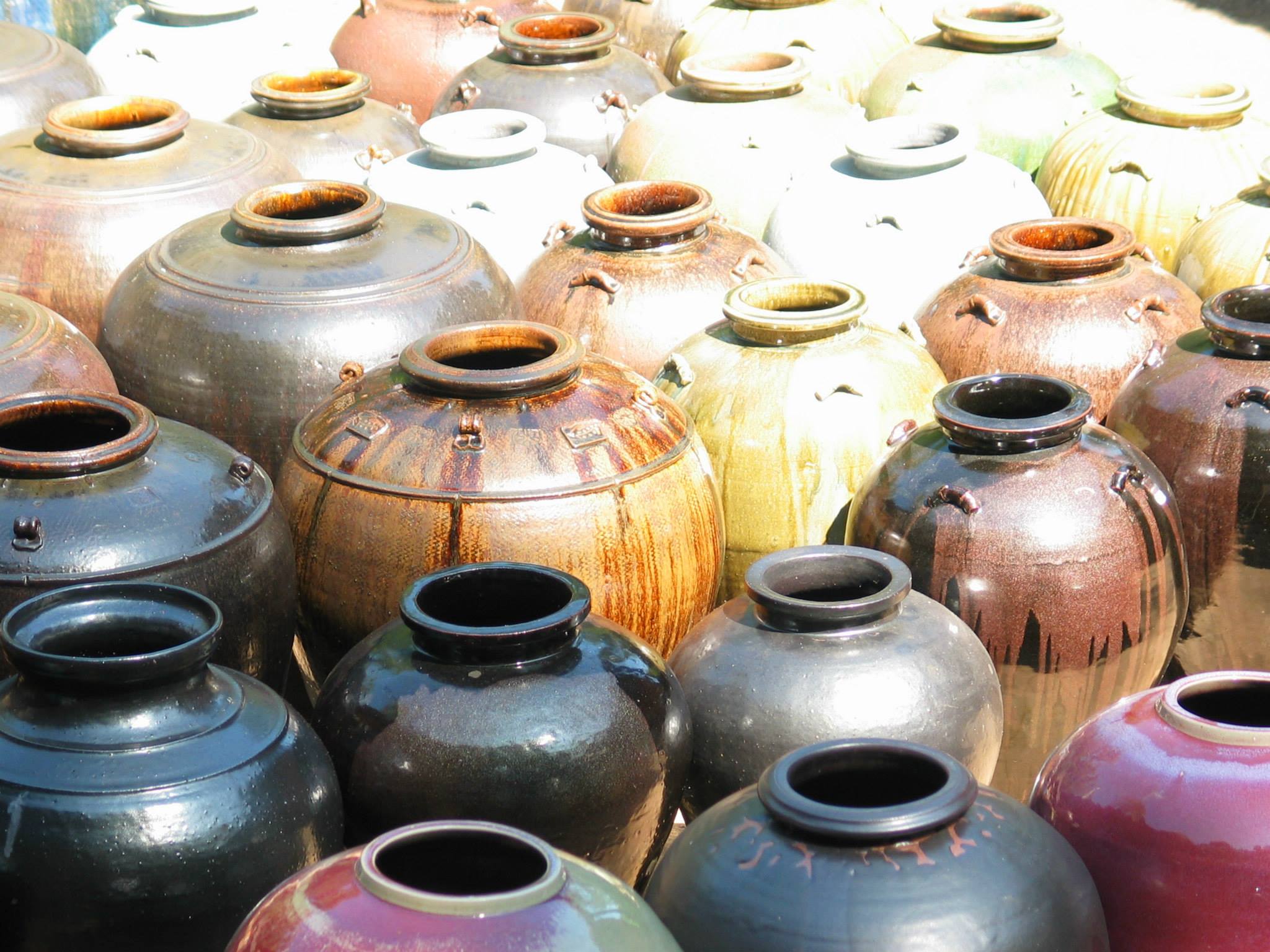 Although often paired with – and compared to – Chiangmai, 200 kilometres south, the two cities are very different in size and tourism appeal. 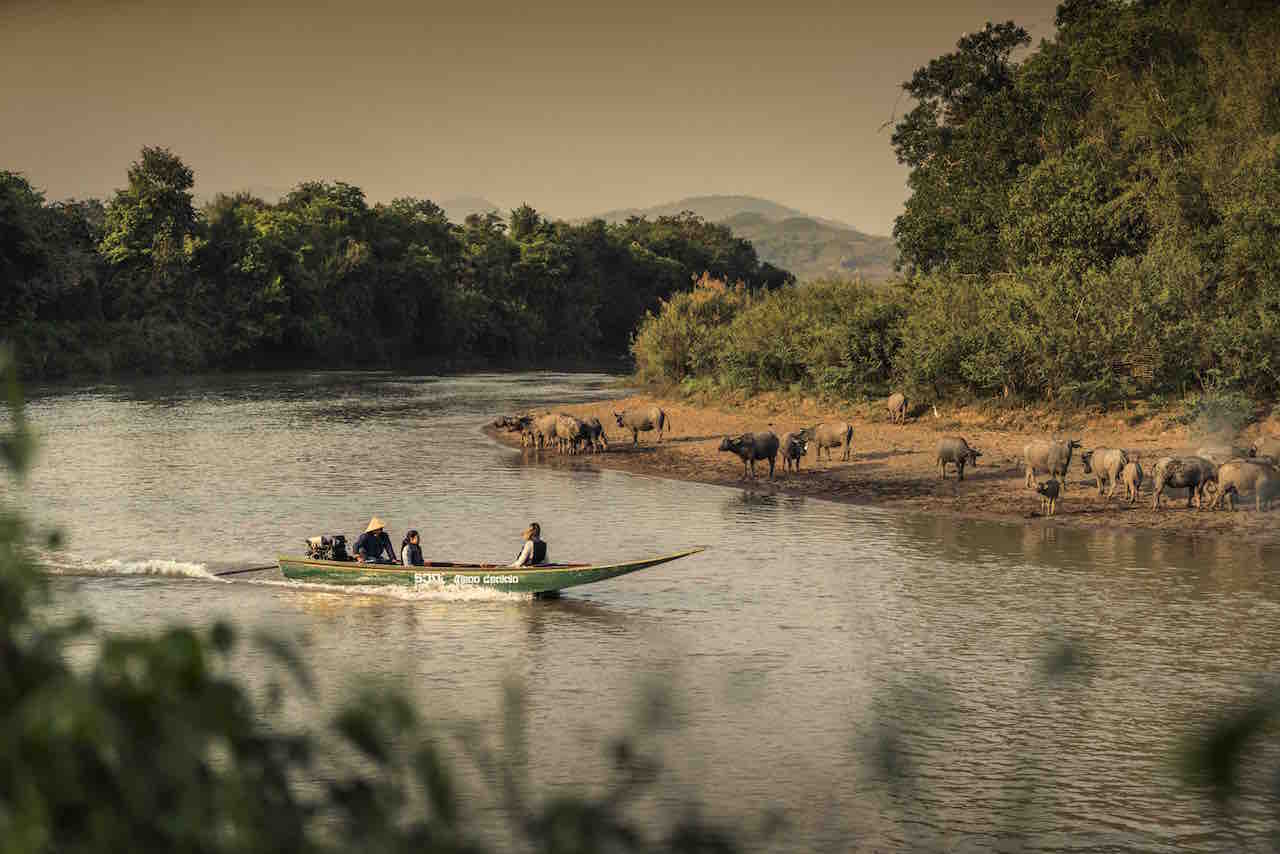 More than 5 million tourists (60 percent domestic, 40 pc foreign) visit Chiangmai each year, but only about a third as many venture to more laid-back Chiangrai. Those who make the trip invariably head for one of numerous hill towns, where six major tribes – each with its own language and culture – live in much the same way as they have for centuries. By far the largest ethnic group is the Karen, whose numbers in Thailand are estimated at 320,000, followed by the Hmong . About 12 percent of Chiangrai province’s one million inhabitants are hilltribes people.

The high western mountains where the hilltribes are located can be visited on day-trips or multi-day treks (walking or by road) that provide are rare opportunity for people to experience life in an ancient village seemingly far removed from a modern, materialistic world. Due to its elevation, Chiangrai’s climate is milder than most other parts of Thailand and there is less humidity. Winter temperatures can plunge below 10C overnight, when the daily average is 21C. The year-round average daily maximum is 25C, with summer highs in the mid 30s. 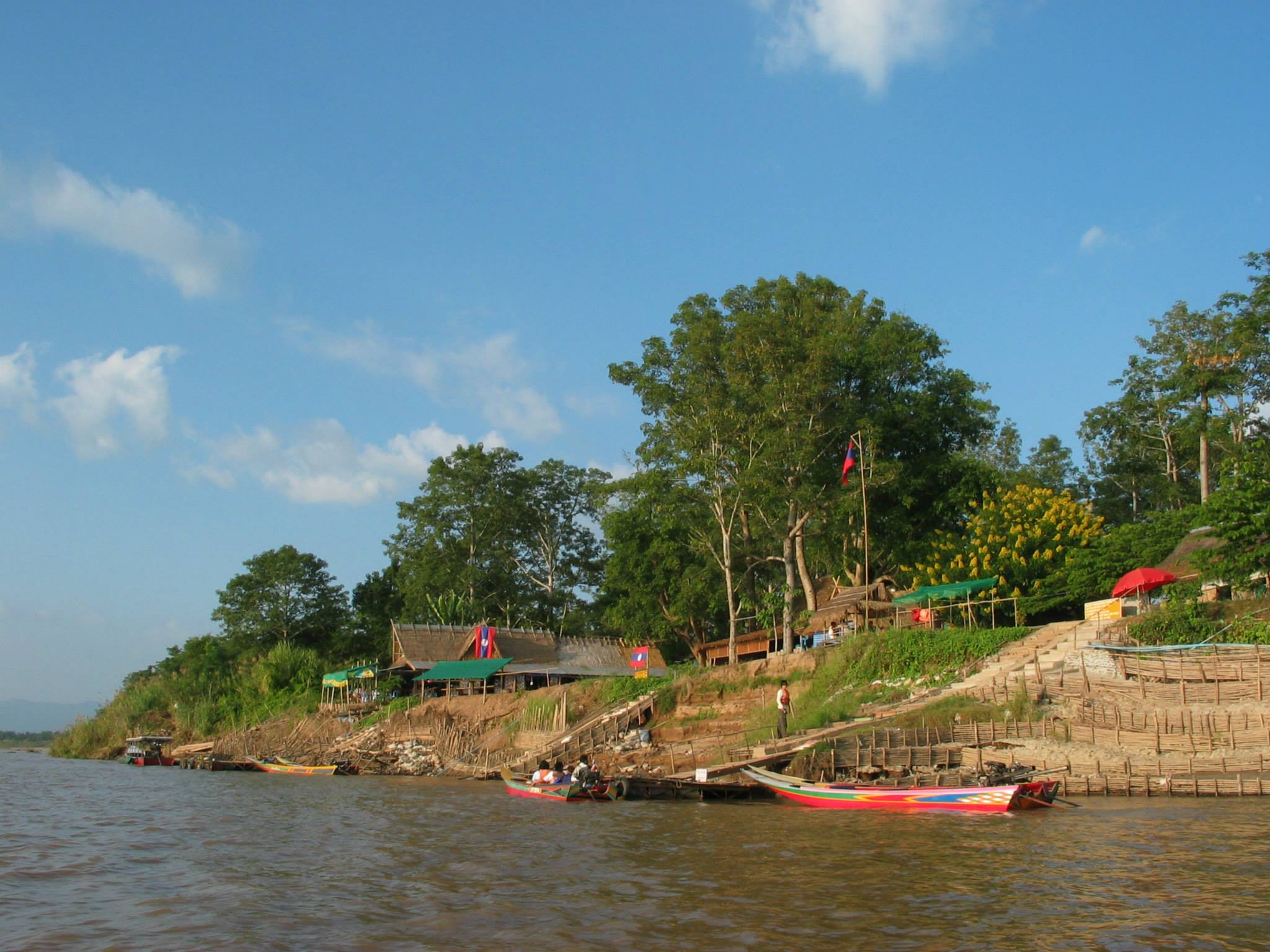 Chiangrai itself is a somewhat sleepy provincial city with, nonetheless, an appealing, laid-back atmosphere. Situated on the flat alluvial plain of the Mae Kok River, a tributary of the Mekong, there are four bridges spanning the river within the town’s boundaries, each bridge running south–north.

Originally called Wat Pa Yia (Bamboo Forest Monastery) in the local dialect, this is Chiangrai’s most revered Buddhist temple. The main prayer hall is a medium-sized, well-preserved wooden structure. The octagonal chedi behind it dates from the late 14th century and is in typical Lanna style. The adjacent two-storey wooden building is a museum housing various Lanna artefacts.

In 1434, lightning struck the temple’s chedi, which fell apart to reveal the Phra Kaew Morakot, or jade emerald Buddha. This significant national icon is now housed in the temple of the same name in Bangkok.

In 1990, a Chinese sculptor was commissioned to make a new image from Canadian jade. Named the Phra Yok Chiang Rai (Chiang Rai Jade Buddha), it is almost the same size as the original and is housed in the impressive Haw Phra Yoke, the walls of which are decorated with modern murals depicting the journey of the original Phra Kaew Morakot and the elaborate ceremony when the current image arrived in Chiangrai.

Lion Hill is the site of a Buddha cave and a natural cavern where hikers can walk in the south side and out the north side of the hill that parallels the Mae Kok River.

Saturday Night Walking Street just north of downtown where hundreds of locals display their crafts and food. Local dance and displays are also a feature. A privately-guided excursion is recommended to Mae Chan, north of Chiangrai, to visit Yao and Akha hilltribe villages. A visit to Mae Sai, the most northern border village between Thailand and Burma, with its bustling market place and the opium museum in the Golden Triangle also can be included.

If you venrture on to the Golden Triangle area – where the borders of Thailand, Burma, and Laos convene – you can visit the famous Opium Museum. The old city of Chiang Saen, dating back to 1260AD and set on the steep banks of the Mekong River, opposite Laos, is also

Tham Tu Pu and the Buddha Cave can be accessed from the Mae Fah Luang Bridge, northwest of the city centre. While neither attraction is particularly amazing on its own, the surrounding country is ideal for a lazy bike or motorcycle ride. 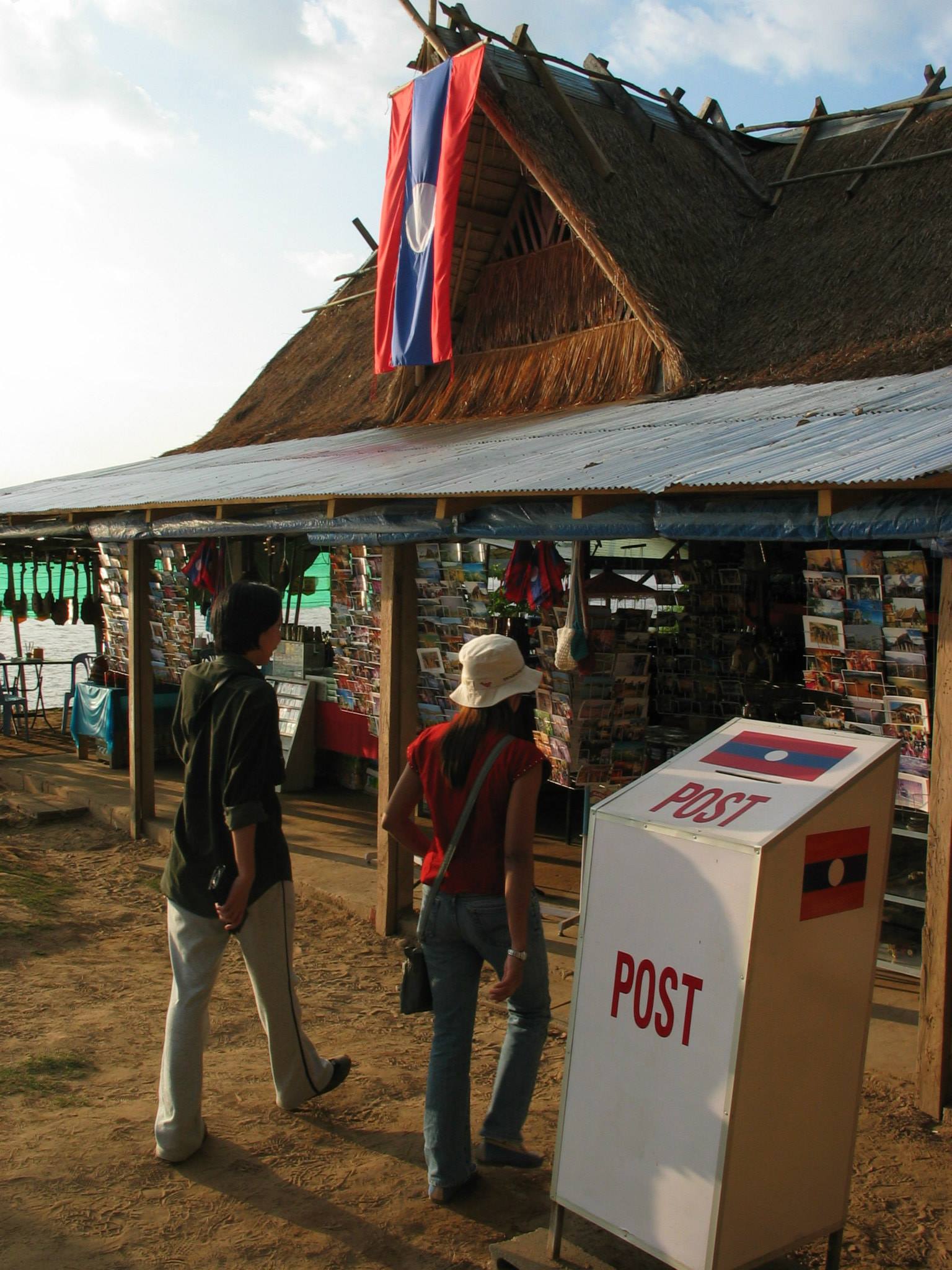 Food is always an important part of visiting provincial Thailand, and in this respect Chiangrai has plenty to offer.

One of the city’s most delicious dishes is available at Lung Eed, a simple shophouse restaurant. The sublime lap kai (minced chicken fried with local spices and topped with crispy deep-fried chicken skin, shallots and garlic) is a must.

Barrab is a funky Thai restaurant among the many food shops near the clock tower, serving an excellent Thai menu at attractive prices, good price. Its owners lived in Australia for 10 years so their English is very good. The green papaya salad is a specialty.

Ran Lab Sanam Keela is a popular authentic northern Thai cuisine restaurant. Although the menu may seem limited, each dish reflects the traditional dining culture of the area. The yang ruam, made of grilled pork, intestine, and liver is delicious when dipped in the house soy sauce.

Nam Ngiaw Mawdin Pa, a budget level restaurant, is said to serve the best nam ngiaw in northern Thailand. A favourite dish of locals, nam ngiaw is made with a tomato base, mixed with dry roasted chilies, pork bones, congealed blood and is served with noodles.

Moommai serves traditional Thai food in a tropical garden. Staff are dressed in traditional Thai costume and there is live folk music at night. The food is beautifully prepared and showcases Lanna cuisine and Chinese-influenced dishes. Crispy catfish with mango salad is a specialty.

Jatujak Art Gallery Restaurant is a vintage art gallery style eatery that serves traditional local cuisine with a modern twist. The seafood rice and coconut drinks are most popular. 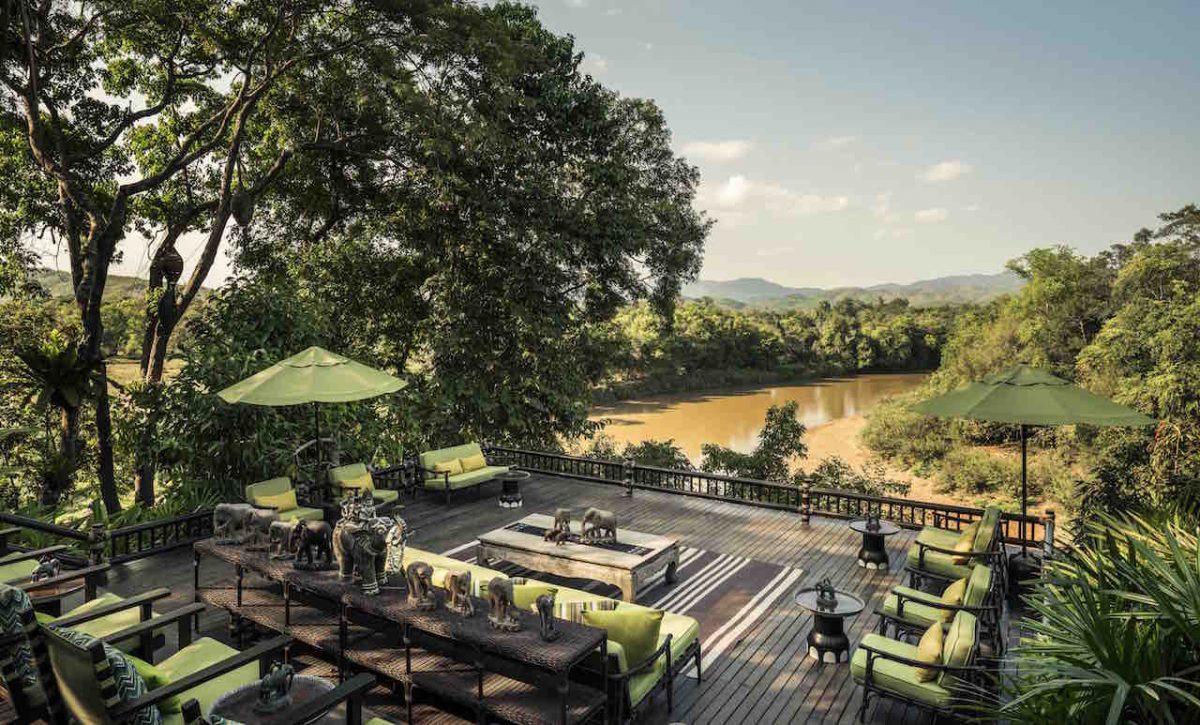 Each 54-square metre tent is air-conditioned and appointed with leather and hardwood bush chairs, paddle fans and a hardwood desk. A custom-made wooden hot tub is perched on a 37-square-metre outdoor deck. There is an open-air spa nestled amid bamboo trees and features nature-inspired treatments.

Perched on a ridge overlooking the point where Thailand, Myanmar and Laos meet, and where the Ruak and Mekong Rivers converge, Anantara Golden Triangle Elephant Camp & Resort is designed as a traditional mahout village and even has an on-site elephant camp. Here, guests can learn to command their own elephant through specialist mahout training courses.

A special Discovery Package features the most luxurious rooms and suites, with gourmet dining, an unforgettable destination experiences and additional privileges.

The 159-room Le Meridien Resort is situated on the banks of the Mae Kok River with a large swimming pool and services that include a river cruise and yoga sessions.

Le Patta is a chic modern hotel located in the heart of Chiangrai with excellent facilities and a Thai-European fusion restaurant.

Maryo Resort comprises 60 rooms, each with an artistic touch, set in a tranquil garden setting just 1.5km from the clock tower in Chiangrai.

Dusit Island Resort is a large modern facility on an island in the middle of the Mae Kok River. An organic garden and cooking classes are among many features of the property.

The Legend Chiangrai Spa Resort provides an authentic Lanna atmosphere with northern Thai architectural details, local artworks, teak furnishings and white hand-plastered walls. Situated on the banks of the Mae Kok River, its Chiang Saen Spa is perfect for pampering after a day’s exploring the attractions of the city and surrounds.